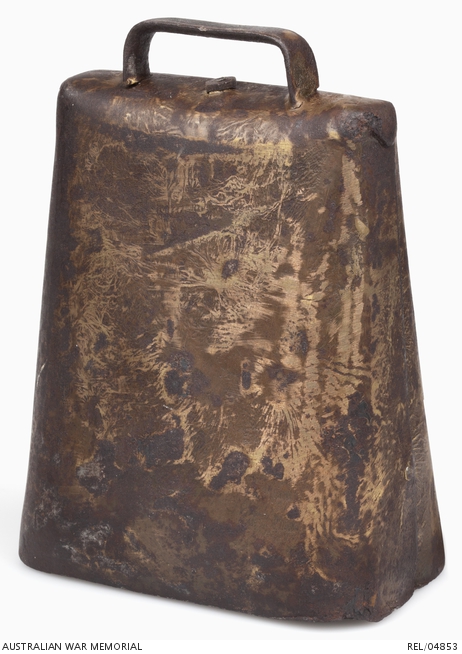 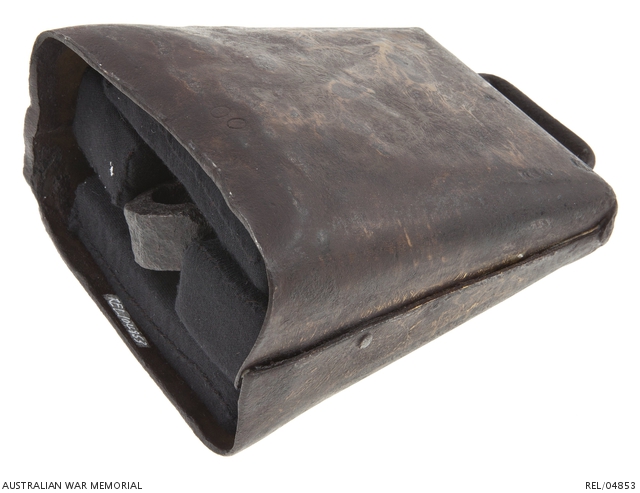 Iron buffalo bell of folded and rivetted construction, originally with an apparent gilded finish. A mounting handle is brazed to the top while a steel loop, bolted to the top interior bears a thick steel wire, hooked at each end, to which the striker is mounted. This appears to be an old corroded iron bolt.

Buffalo bell used by Joseph Murray Johnson, a Post Master General (PMG) employee and AWA-trained radio operator. Murray was working for the PMG in Western Australia when the First World War was declared. He recalled: 'Shortly after the declaration of war, all coastal Radio Stations were transferred from the PMG's Department to the Navy, and all staff went into naval uniform, and were appointed with appropriate ranks eg - Warrant Telegraphist, Warrant Officer - and the officer in charge of a station became a Commissioned Warrant Officer.'

Johnson was working at the Geraldton, WA station in 1917 when he was transferred to the Coastal Radio Station at Darwin. Initally housed in the Railway Master's cottage, Johnson and his wife Doris and their two children moved to better accommodation later in 1918, renting rooms at the local Methodist minister's at Myilli Point.

'Just after moving into the Reverend Pratt's Manse, we purchased a second hand Model T car, and carried out extensive repairs, including re-upholstery and painting.'

'At the end of the war I received a telegram in code from the Navy Office Melbourne stating 'Armistice signed. Please advise Darwin populace.' By the time I had decoded the message it was midnight. My wife and I in our Model T car then commenced a house-to-house tour of Darwin homes, Mrs Johnson standing on the back of the car, ringing a Buffalo Bell, announcing the good news. We finished the task about 5 am, but had by then run out of petrol and had to walk home.'

'We were delayed at some homes - Judge Ewing, who was then in Darwin to investigate the administration, insisted that we stop and have a drink with him.'

In 1980, Johnson, then living in Canberra, rediscovered the buffalo bell lying in one of his old tool boxes, and offered it to the Memorial.