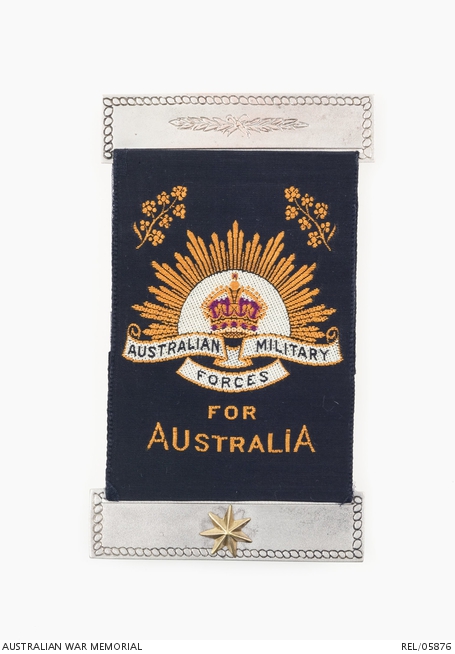 Black silk ribbon with woven design in yellow, red and white, showing wattle sprays, a central 'Rising Sun' badge and 'FOR AUSTRALIA' below. Ribbon is attached at the top to a white metal bar impressed on the front with laurel leaves. On the reverse is the serial number '7856' and a brooch pin fitting. The lower edge of the ribbon is attached to another white metal bar bearing a seven pointed brass star attached with a split pin.

This badge was worn by Mrs Annie Caroline McPerson, mother of Private Leslie Herbert McPherson, who was killed in 1917. Introduced in 1919, the Mothers and Widows Badge was issued to the mother and/or widow of all members of the Australian Imperial Force or the Australian Naval and Military Expeditionary Force who had been killed in action, died of wounds or other causes while on active service, or who, after discharge, had died of wounds or sickness directly attributable to that service. Stars were added to the bottom bar, each indicating the death of one person. Over 36 000 badges were produced.

Leslie Herbert McPherson was born at Kensington, a suburb of Melbourne, in 1896. He was working a a butcher when he enlisted in the AIF, on 13 January 1916. He had previously served for six years in the senior cadets and a year in the Citizens Military Force.

After initial training McPherson was assigned as a private to the 11th Reinforcements for the 24th Battalion, with the service number 4472. He sailed for service on the Western Front on 21 March aboard RMS Malwa, travelling via Egypt and England, and joined his battalion on 5 August 1916, in time to take part in the battle of Mouquet Farm.

From late autumn 1916 to early spring 1917 the battalion alternated between front line patrolling and labouring tasks. McPherson was evacuated to hospital suffering from trench feet on 6 November, returning to his unit three weeks later.

At Favreuil on 19 April 1917, while the battalion was resting and cleaning up equipment, McPherson was in a group of men hit by a stray shell. Suffering severe shrapnel wounds to his buttocks, legs and elbow he was evacuated to the 6th Australian Field Ambulance and then to the 45th (British) Casualty Clearing Station, where he died the same day. A further eight men were wounded in the incident. McPherson is buried at the Achiet-le-Grand Cemetery Extension, France.