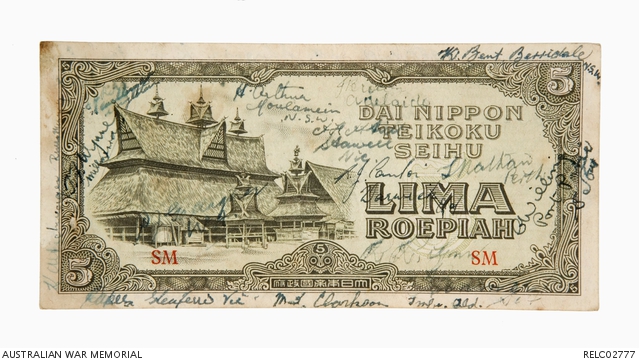 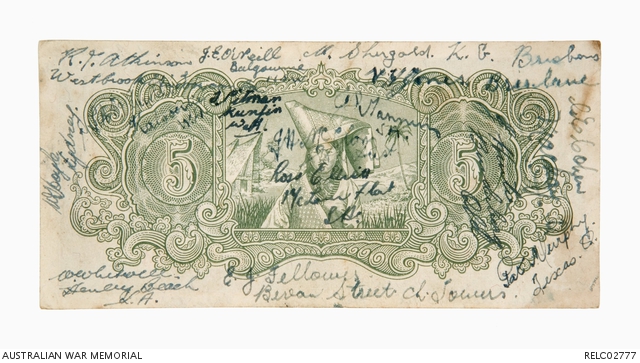 This note is from the Dai Nippon Teikoku Seihu Series of the Japanese Invasion Money (JIM) from the Netherlands East Indies (NEI) which was issued in 1943 by the Southern Development Bank in Java under the authorisation of the Japanese Government. This series and the Philippine Rizal Monument series are the only ones that were widely circulated with designs different from those of initial JIM issues. The denominations are in Indonesian, but the major inscription is Romanized Japanese. The word “Seihu” is usually spelled “Seifu.” Why the unusual spelling was used is not know.
The Japanese military launched its invasion currency with the occupation of Malaya in December 1941. It was to be used on par with the prevalent British Straits currency. The issue of currency control was resolved by introducing different military notes to suit the diverse monetary units of the occupied countries. British Malaya, Singapore and North Borneo utilised dollars and cents as their standard unit. The Philippines utilised Centavos and Pesos, the Netherlands East Indies used Guilders and Cents and the British Islands in the Pacific and adjacent seas, including New Guinea utilised Pounds and Shillings. The differentiation of the military notes used in the various Japanese occupied regions was through the first letter of a system of code letters called blocks. For example, the Burmese military note had its block letter beginning with ‘B’; Malaya’s began with ‘M’; while the Philippines adopted the letter ‘P’. The letter ‘S’ was allocated for the JIM of the NEI.
SX1820 Corporal Desmond Eric Osborne was born on 16 January 1920 at Pinarro, South Australia and served with the 3rd Australian Light Horse Regiment from 1938-39 before enlisting in the 2/10th Australian Infantry Battalion on 2 March 1940. The 2/10th was the first South Australian battalion formed for service during the Second World War and was part of the 18th Brigade, of the 6th Australian Division. Osborne embarked for the Middle East with the battalion on 5 May 1940, however they were diverted to the United Kingdom (UK) to bolster defences following the fall of France. Osborne disembarked at Gourock in Scotland on 18 June and was subsequently based at Lopcombe Corner, near Salisbury, in England. The battalion relocated to Colchester in October and left the UK on 17 November. The 2/10th arrived in Egypt on 31 December 1940, but the whole battalion was not committed to active operations until it moved, with the rest of the brigade, to Tobruk in the first week of April 1941. The battalion took part in the defence of Tobruk until it was withdrawn at the end of August. After Tobruk, the 2/10th trained in Palestine and between late September 1941 and early January 1942 formed part of the force garrisoning Syria. It sailed for Australia on 11 February, disembarking in Adelaide on 29 March. Osborne was part of the 2/10th's next series of battles in Papua arriving at Milne Bay on 12 August. On the night of 27 August the battalion was overwhelmed by Japanese marines in a confused battle. The battalion fared even worse in its next engagement - Buna. Between 23 December and 2 January the 2/10th lost 113 men killed and 205 wounded around the old airstrip. The 2/10th's final engagement in Papua was at Sanananda between 9 and 24 January 1943. The battalion, including Osborne, returned home on 12 March 1943. Osborne spent time training around Port Moresby and in Australia before participating in the battalion’s final operation of the war. On 1 July 1945 the battalion landed at Balikpapan in Borneo and stormed the heights of Parramatta Ridge. In ensuing days it cleared the Japanese from in and around Balikpapan town, and was withdrawn into reserve on 6 July. It did not carry out another active role before the war ended on 15 August 1945.