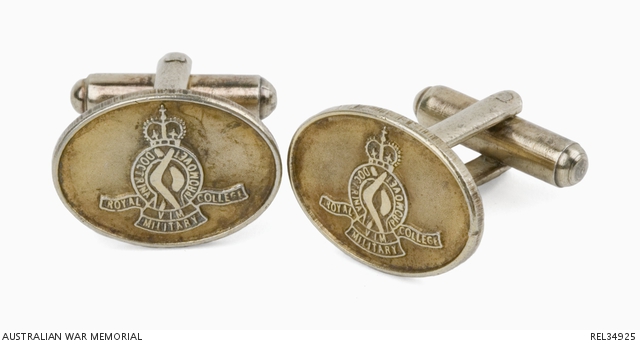 Pair of gilded metal cufflinks, with swivel post fastening, bearing on the front face a raised representation of the badge of the Royal Military College Duntroon.

Cufflinks associated with the service of Captain John Edward D White, Australian Army Training Team in Vietnam. Captain John White arrived to take over 11 Mobile Strike Force (Mike Force) Company in Da Nang in February 1968. The 2nd North Vietnamese Army Division was moving from Laos into South Vietnam and his mission was to establish contact with the division and trace its movements south. In mid March the company was air lifted to the Special Forces camp of Kham Duc, near the Laotian border. They used an old French Foreign Legion fort as a temporary base from which patrols could be sent out. White called it Ngok Tavak, after a nearby mountain. Initially patrols failed to find the enemy, but in late April a patrol clashed with the enemy. At the same time, White received intelligence that the NVA division was closing in. At night they could hear explosions in the distance heading toward them. White decided their best chance was to leave the fort and take to the jungle to adopt guerrilla tactics. However, in the meantime a platoon of United States Marine Corps artillery arrived bringing with them two howitzers and a stockpile of ammunition. To abandon the fort was to abandon the guns. White contacted Da Nang, explaining the predicament, and was ordered to remain where he was. A Civilian Irregular Defense Group (CIDG) platoon was sent to reinforce his numbers. This was a para military force comprised mainly of indigenous highlanders, trained by United States Special Forces. They also brought with them two mortars and their crews. At 3.15am on 10 May 1968 some members of the CIDG chose to assist the NVA to attack the fort instead of supporting Mike Force, and close hand to hand fighting followed, along with grenade attacks and heavy machine gun fire. Air support offered a brief respite from the NVA attack, and some NVA forces were pushed back outside the perimeter by counter attacks, but at 9am White contacted Da Nang to advise that his position was untenable. A second attack was imminent and they could not withstand it, so they would have to withdraw. The wounded were evacuated by helicopter (under orders from Major Mai, the NVA had not attacked the previous medical helicopters that collected the wounded under the cover of air strikes) and at 1pm the rest of the force evacuated east, into the jungle. The NVA did not notice their withdrawal, and continued mortar attacks on the fort for another ninety minutes. Seven kilometres from the fort White called for a helicopter withdrawal of his forces. The force was successfully lifted to Kham Duc and then Da Nang. At Ngok Tavak, White had a ‘bunker’, essentially a hole with some sandbags around and over it. When the evacuation was being organised, all the captured enemy flamethrowers, other weapons and explosives were thrown into the bunker and blown up. Also in the bunker was White’s ‘wet pack’, with his razor, tooth brush and other toiletries. In it, unknown to White, was a pair of RMC Duntroon cufflinks in a side pocket. White ordered that no one was to take personal items with them, just their weapons and ammunition, so his wet pack was still in the bunker when it was blown up. In 2003 an American forensics team visited Ngok Tavak searching for the remains of American servicemen. During their excavations they found the remains of White's wet pack, including the cufflinks. As the cufflinks had boomerangs on them the forensics team linked them to Australia and tracked White down, returning the cufflinks he had not known he had been carrying or lost. White wore the cufflinks at a reunion held in the USA for the battle, in October 2005.