"Following the barrage, 20th September, 1917". A hand-coloured print of a photograph taken by an ... 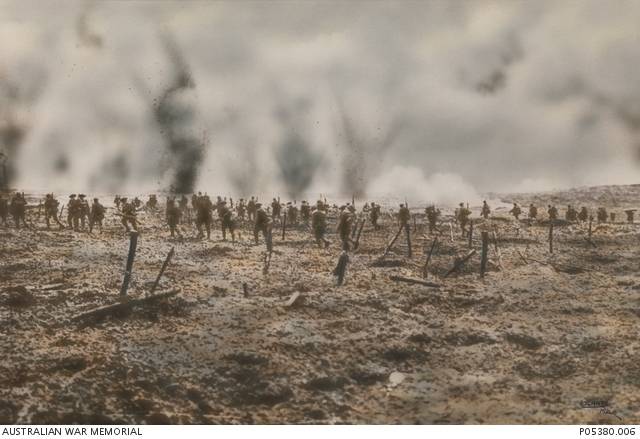 "Following the barrage, 20th September, 1917". A hand-coloured print of a photograph taken by an unknown Australian soldier showing the attack on Polygon Wood by the Australian troops that followed a great barrage on the morning of 20 September 1917. This hand-coloured print was produced by Colarts Studio, also known as the Colograph-Art Company. Colarts was the contractor to the Australian War Memorial for producing photographic prints for sale to the public. The studio produced enlargements, intended for framing, and toned and hand-coloured prints. Joynt also collected soldier photographs, from which he produced, exhibited, and sold similar coloured enlargements. Colarts was owned by Capt. William D. Joynt, V.C. Colarts Studio operated at 98 Albert St, Windsor, Melbourne, then 447-9 Law Courts Place, Melbourne. The entry for this print in Colarts' catalogue of soldier photographs carried the following caption: "The Passchendaele operations saw the greatest concentration of artillery in the war - one gun to every nine yards of front - throwing projectiles weighing from 18 lbs. to nearly a ton, to a depth of 1000 yards. Advancing in lifts of 100 yards every three minutes, our men literally walked behind a wall of fire". This print was made in Colarts' Windsor studio. Joynt's collection of soldier photographs was later acquired by the AWM.