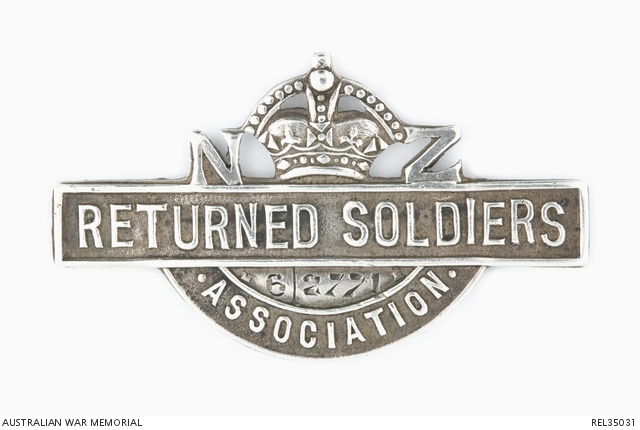 Silver New Zealand Returned Soldier's Association membership badge, impressed 6/2771 just above the word 'Association' and impressed RD 861 on the reverse. A small 'MK' silver mark is visible on the panel impressed with the soldier's service number. The badge has a brooch pin fitting on the back.

Related to the service of Gustave Adolph Swanson, a survey chainsman of Glenroy, New Zealand who was born in Sweden on 10 October 1884. Swanson had previously served with the Swedish Navy before emigrating to New Zealand, and enlisted with the New Zealand Expeditionary Force on 13 April 1915 at Nelson. Issued regimental number 6/2771, he was assigned to C Company, Canterbury Infantry Battalion, and after training, embarked for overseas service, arriving at Mudros (Lemnos) on 30 September 1915. He was appointed temporary Lance Corporal on 18 January 1916 and full Lance Corporal on 4 March. A month later, his battalion left Port Said for France, where he served, mainly on the Somme, until wounded there on 17 September 1916. His medical record states '[w]hile holding a trench against a counter-attack, he was hit by a piece of high explosive' in his right chest, resulting in fractured and broken ribs. After treatment, Swanson was assessed for possible return to active service in early December 1916 but was deemed unfit for further service and returned to New Zealand, where he was discharged on 5 April 1917. At some later point, Swanson moved to Australia.