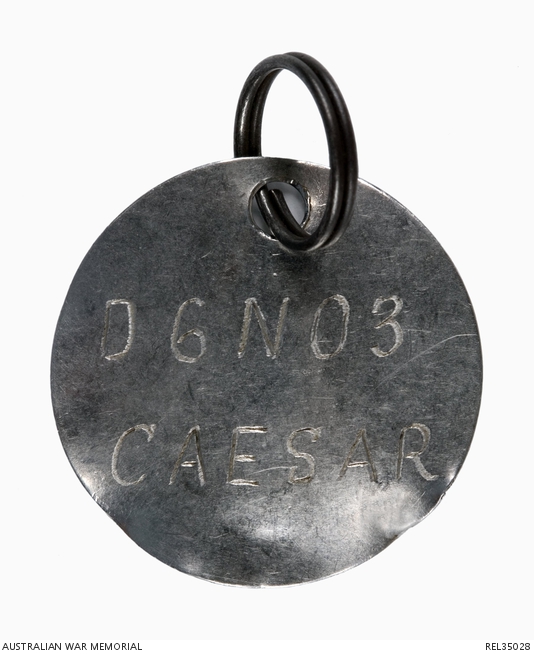 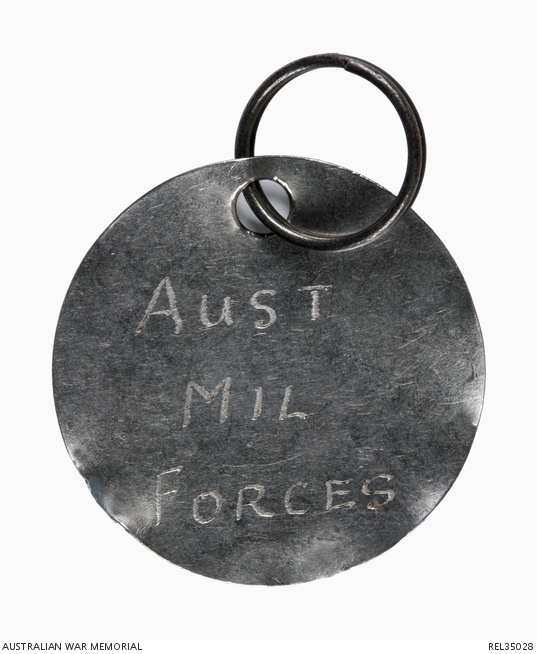 Aluminium disc engraved with 'D 6 N 0 3 CAESAR', indicating that Caesar was from New South Wales and was the third dog taken into the Army in 1966. Engraved on the other side of the disc is 'AUST MIL FORCES'. A hole has been made at the top of the disc through which a steel suspension ring is threaded.

Dog tag worn by Caesar, one of eleven combat tracking dogs who served during the Vietnam War. Caesar, a black labrador kelpie cross, was bought from a Sydney dog refuge by the Australian Army in 1966. He and his handler, 43952 Private Peter Haran, were trained at the Tracking Wing of the Ingleburn Infantry Centre, NSW. In 1967 they were posted to 2 Battalion, The Royal Australian Regiment (2 RAR) and left for Vietnam aboard a RAAF Hercules C-130 on 7 May. Based with the Australian Task Force at Nui Dat, Phuoc Tuy province, Caesar worked as part of a combat tracking team which comprised his handler, two visual trackers, a machine gunner and a signalman. Tracking teams were transported to a location by helicopter and the tracking dog put on the scent of the enemy, following it until the enemy location was found and then ‘pointing’ with his nose or paw in the direction of the hideout. In June 1968 Private Haran completed his first tour of duty and returned to Australia where he was promoted to corporal and posted to the Tracking Wing of the Ingleburn Infantry Centre as a dog handling instructor. However, Caesar remained at Nui Dat and was assigned a new handler from the recently arrived 4 Battalion, The Royal Australian Regiment (4 RAR). Caesar then went on to serve with 5 RAR, 9 RAR and 7 RAR and was assigned a new handler as each battalion withdrew from Nui Dat and was replaced. Due to quarantine restrictions the tracking dogs were unable to return to Australia at the end of their service and Caesar was retired to the British embassy in Saigon in July 1970. In 1971 Haran was posted to 3 RAR and he returned to Vietnam in February as an infantry section commander and served until October that year. He acquired Caesar’s dog tag at a 2 RAR Trackers reunion in October 1987.