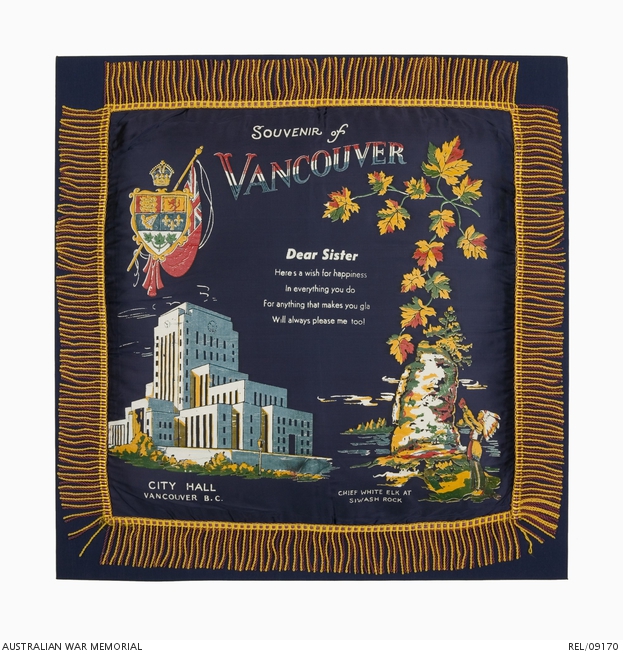 Dark blue silk cushion cover with a puce and yellow braid edge. Painted at the top of the cover is 'Souvenir of Vancouver'. The centre of the cover is painted with the poem, 'Dear Sister/ Here's a wish for happiness/ In everything you do/ For anything that makes you gla [sic]/ Will always please me too!' Encircling the poem are painted representations of Vancouver City Hall, the crown and escutcheon of the Arms of Canada overlaid on the Canadian Red Ensign, maple leaves and Chief White Elk at Siwash Rock.

With its typical Canadian motifs and absence of military symbolism, this cushion cover looks to be the type made before, during and after the Second World War as a standard souvenir of Canada. It was likely acquired by 414416 Pilot Officer Reginald Keith Manttan while training with the Empire Air Training Scheme in Canada before he sent it home to his sister in Australia.

Manttan was born on 16 August 1919 in Brisbane, Queensland to Reginald Francis Ryan and Dorothy Marion Manttan. It was here that he enlisted for service in the Royal Australian Air Force on 14 September 1941. Only 18 months later he was killed in a flying accident at Seawich Inlet, Vancouver Island, Canada on 14 March 1943 while on operational service with the Royal Canadian Air Force. He served as the Navigator in a crew of two Australians and two Royal Canadian Air Force personnel, all of whom were killed when the aircraft in which they were flying crashed. While flying over the sea on a night flying test, their aircraft was seen to crash into the water in the inlet. It was presumed that all members of the crew were killed instantly on impact. He is commemorated at the Ottawa Memorial.