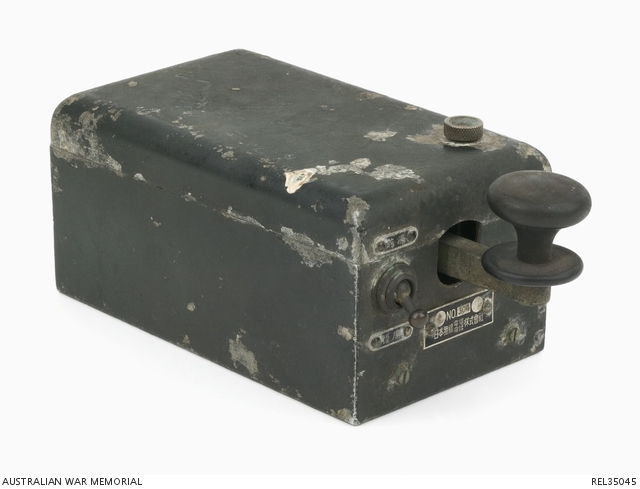 Japanese morse code key. This key is housed in a rectangular, olive green-painted aluminium box with the paddle extended at one end. The box has a removable lid, which is held in place by a standard screw located in the bottom right hand corner. There is a two-way toggle switch on the front left hand side of the box with "Front Seat" and "Rear Seat" written in Japanese above and below the switch respectively. A nomenclature plate located on the front centre of the box below the paddle has two anchor symbols impressed onto it and reads "No. 304 The Japan Wireless Communication Telephone Company" in English and Japanese.

This morse code key belonged to an aircraft from the Imperial Japanese Navy. It is most likely to have come from either a two or three seater aircraft such as the Aichi D3A codenamed "Val" by the Allies. The key was souvenired by S/7757 Cook Lindsay Murray in 1945 during the evacuation of Allied prisoners of war and civilian internees in the Pacific. Murray had left Australia in April 1945 aboard the minesweeper HMAS Latrobe arriving at Langemak on the 23rd to begin a tour of duty in the Halmahera Islands/Borneo area. In May the ship spent spent nine days operating as an anti-submarine unit off Tarakan, Borneo, followed by similar duties at Morotai. In July and August Latrobe returned to Borneo for a period as the duty minesweeper off Balikpapan, carrying out a bombardment of the Japanese held village of Separtim on 3 August. When hostilities ended on 15 August Latrobe was anchored at Morotai.
In September 1945 Latrobe operated between Morotai and the Celebes, evacuating Allied prisoners of war and civilian internees. In October the ship transported occupation forces to Menado and Sandakan, returning to Sydney in December from Labuan, Borneo, with two small craft in tow. Murray joined HMAS Penguin on 31 January 1946 staying with that base until 24 July 1946 when he was discharged from the Royal Australian Navy.