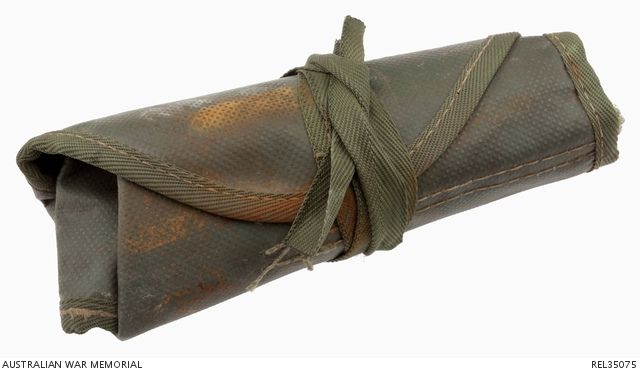 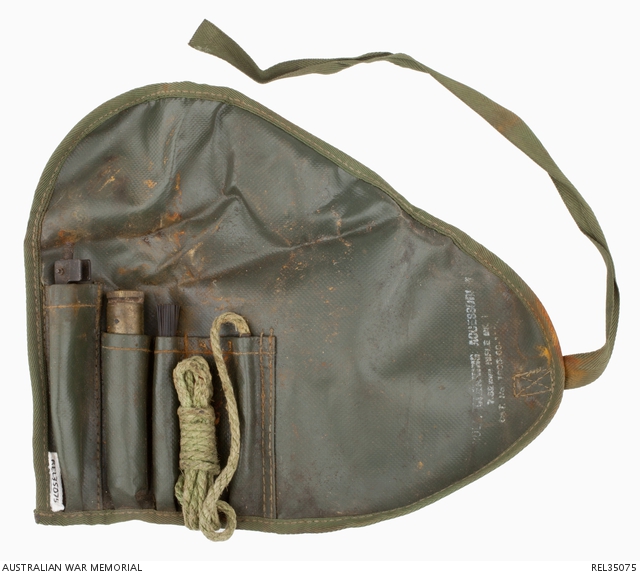 Self Loading Rifle cleaning kit. The kit is housed in dark green canvas with a green nylon webbing fastening tape. The maker's details, stamped in white paint, are located on the right side of the opened kit and although faded, are mostly legible. It read 'ROLLS CLEANING ACCESSORIES / 7.62 M/M RIFLE MKI / CAT. NO. 1005-66 [obscured]'. The kit contains a metal combination tool which consists of a gas regulator key, two screwdrivers, a tool for adjusting the foresight and the threaded section to which a barrel cleaning brush, generally carried by the section commander, would be attached. The kit also contains a metal oiler bottle which has a screw on cap and a long metal applicator attached to the underside, a brush with a black Bakelite handle and black nylon bristles used for brushing away dirt or other particles and a barrel pull through consisting of a long metal rod with a length of green nylon cord attached to it.

Associated with the service of Leading Aircraftman John Alexander Scott. Scott was born in Horsham, Victoria on 22 October 1950 and enlisted in the RAAF on 7 October 1968. Having trained as an airfield defence guard Scott was posted to Vietnam for a twelve month tour of duty arriving on 29 July 1970. For the first six months of his tour, Scott was a guard at 9 Squadron's RAAF base at Vung Tau undertaking regular patrols and tower duty around the perimeter of the base.

From January 1971 Scott flew as a door gunner on 9 Squadron's Iroquois helicopters. Initially he flew on slicks and dustoffs before transferring to gunships. Slicks were helicopters used primarily for carrying troops, equipment or supplies and were fitted with either single or dual 7.62 mm calibre M60 machine guns on an M23 mounting. Dustoffs were also slicks but were used for aero-medical evacuations only. Slicks and dustoffs were frequently accompanied by gunships - code named 'Bushrangers' for aero-cover and defence when approaching 'hot' landing zones and to provide additional fire support. Gunships were fitted with an additional weapons system on top of the single or dual 7.62 mm calibre M60 machine guns. On each side of the helicopter was an M21 mounting fitted with an M134 7.62 calibre mini-gun and an M158 seven-tube 2.75 inch rocket launcher.

In total Scott flew 1100 missions, including flying in support of Operation Overlord, which was a search and clear operation intended to destroy Viet Cong (VC) and North Vietnamese Army (NVA) units in the Suoi Nhac area, eight kilometres east north east of the Long Khanh-Phuoc Tuy provincial border. In nine days of operations, from 5 to 14 June 1971, the Australians suffered 32 casualties (including 12 killed in action), the loss of a helicopter and a number of vehicles. Six VC/NVA soldiers were killed and three were captured, along with two weapons, ammunition, clothing, food and medical supplies. A number of bunkers were also destroyed. After his tour to Vietnam, Scott was posted to 1 Operational Support Unit. He continued to serve in the RAAF until his retirement in 2000.