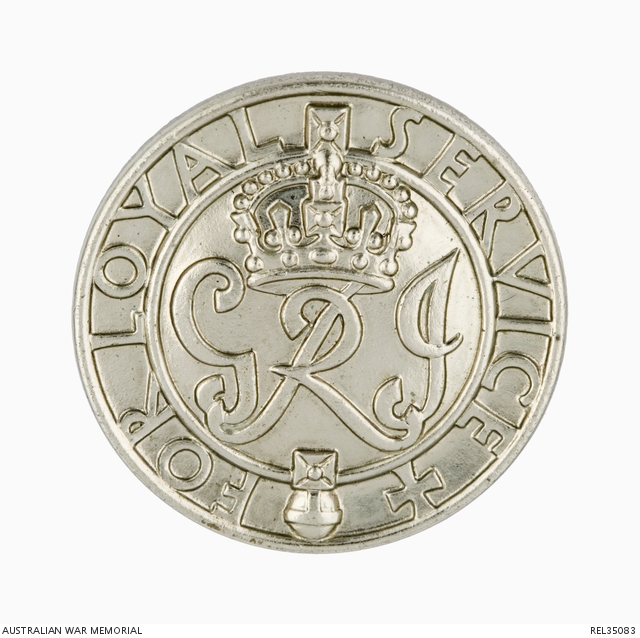 Round silver lapel badge with the Royal cypher (GvR) and crown in the centre bordered by the words 'FOR LOYAL SERVICE'. A lapel fitting is soldered to the reverse. Contained within its original issue box. The lid of the box is labelled 'Ministry of Pensions. THE KING'S BADGE. Every precaution should be taken against loss, thus preventing the Badge falling into the hands of an unauthorised user. It will not be replaced if lost.' Written across the base of the box in purple pencil is 'MI/781211'.

Related to the service of D JX 161854 William John 'Bill' Irwin, Royal Navy. Having experienced an unhappy childhood in Wales, Irwin joined the navy at age 15, becoming a boy seaman based at Devonport. He served as a Boy (First Class) aboard HMS Prince of Wales and was present when the ship was attacked and sunk by Japanese Betty bombers on 10 December 1941in the South China Sea, but survived the experience. His family states he was 'in the water twice' but cannot recall which ship he was associated with on the second occasion. The combined experiences damaged his lungs and his nerves. He emigrated to Australia after the war ('he hated Wales'), met his future wife Jill when aged 50 and died 11 years later, after 10 years of marriage. The King's Badge was awarded to those invalided on pension from the Armed Forces and the Merchant Navy and fishing fleets through wounds or war disablement attributable to service, and later (from December 1944) extended to members of the British Home Guard and the Coastguard.