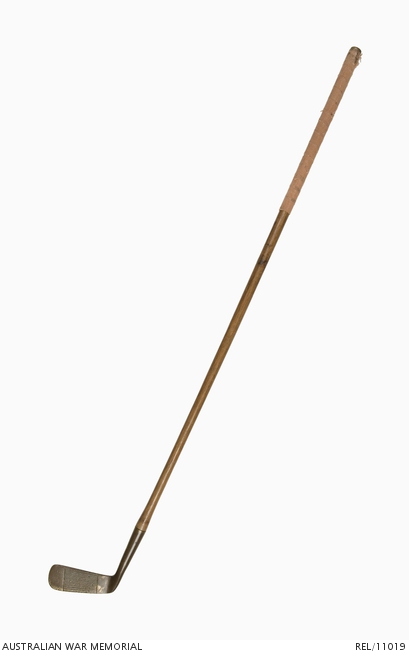 Wooden long iron golf club with brass head. Cotton tape has been wound around the top third of the wooden shaft of the club as a grip. Engraved on the reverse of the head of the golf club is MADE FROM BRONZE PROPELLERS FROM "VINDICTIVE" ZEEBRUGGE. Engraved beneath this is J. STONE & Co Ltd LONDON.

The bronze head of this golf club was cast from the bronze propellers of the HMS Vindictive. The golf club was owned by Stanley Bigg, 4 Machine Gun Company, who enlisted on 8 February 1916 and sailed from Brisbane as a Private on 1 May 1916 on HMAT Clan McGillivray. On 25 September 1917 he married Katie Wright at the Parish Church of St Anne in Willesde, Middlesex. Bigg was wounded in May 1918 with a gun shot wound to his right leg. After some time in hospital because of his wound, he was invalided to Australia on 1 August 1918. HMS Vindictive was used for a series of raids against the bases at Zeebrugge, Bruges, and Ostend in German-held Belgium. Vindictive was sunk during an operation at Ostend on 10-11 May 1918. Her hulk was broken up after the war.