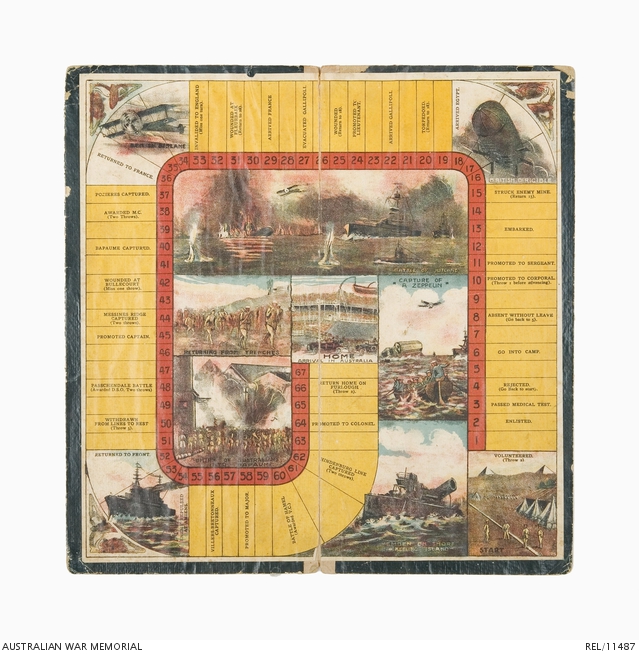 Square playing board designed to fold in half. The reverse of the board is finished in dark green, while the playing surface is printed with a basic race game layout of 67 yellow playing spaces running in a circular route between Start and Home. There are 27 blank playing spaces and the remainder are printed with instructions which will affect the player's progress. These include 'Enlisted'; 'Rejected (go back to start)'; 'Absent without leave (Go back to 5)'; 'Arrived Gallipoli'; 'Promoted to Lieutenant'; 'Evacuated Gallipoli'; 'Wounded at Fleurbaix (return to 28)'; 'Pozieres captured'; 'Awarded MC (two throws)'; 'Bapaume captured'; 'Passchendale battle (Awarded DSO. Two throws)'; 'Promoted to Major'; 'Battle of Hamel (Awarded VC)'. The remainder of the board is decorated with ten full-colour illustrations of First World War incidents, mostly of a general patriotic 'Empire' nature. They depict troops training at camp; a 'British dirigible'; a 'British airplane'; a 'British destroyer'; 'Battle of Jutland'; 'Capture of a Zeppelin'; a troopship disembarking at an Australian port; 'returning from trenches'; and two images which are inspired from photographs: 'Emden on shore - Keeling Island' (see AWM image H18852) and 'Entry of Australians into Bapaume' (see AWM image E00426 - the 5th Brigade band).

History unknown. The style of printing and layout suggest that the game was manufactured by National Games Company, of Melbourne, whose designer was Christopher George King. The game is a unique immediate post-war example of an Australian game featuring many of the First World War battles which Australians remembered.