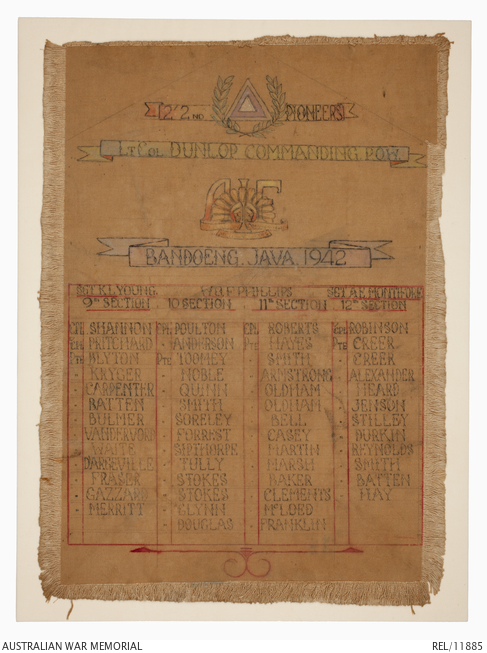 Associated with members of the 2/2nd Pioneer Battalion who were taken prisoner of war by the Japanese at Java in March 1942.

The Battalion was raised in Puckapunyal, Victoria in May 1940. After completing its initial training, the battalion sailed for the Middle East in April 1941 aboard the Queen Mary.

Arriving at Suez in May the unit began preparing for its first action supporting the 7th Division against the Vichey French in Syria.

On 17 June the Pioneers participated in their first attack where they suffered heavy casualties. Despite the losses the battalion remained in action for the remainder of the campaign.

Following the surrender of the Vichy French in mid July the battalion trained and conducted garrison duties until early 1942 when the 2/2nd began the voyage home to Australia on the troopship Orcades. The 2/3rd Machine Gun Battalion, 2/6th Field Company, and other support units were also on board.

On 17 February, two days after the British forces surrendered in Singapore, the Orcades reached Oosthaven in Sumatra. The troops were diverted to Batavia, Java to mount a defence against the impending Japanese invasion.

The troops aboard Orcades, combined with Dutch troops and became known as 'Blackforce'. They were placed under the command of Brigadier Arthur Seaforth Blackburn VC.

The Japanese landed on Java on 28 February where despite fierce resistance the island's Dutch authorities were forced to capitulate on 8 March. Elements of Blackforce including Blackburn persisted but finally surrendered three days later.

The majority of the 2/2nd survived the fighting and spent the rest of the war as prisoners. Of these, approximately one third died, most while working on the Burma-Thailand railway.

At the time that the roll was made the POWs were under the command of Lieutenant Colonel Edward 'Weary' Dunlop. The maker of the roll, VX27889 Private Charles Edward Hay, died from dysentery in Thailand on 20 May 1943. The roll was returned to Australia at the end of the war with repatriated members of the 2/2nd Pioneer Battalion and donated to the Australian War Memorial.