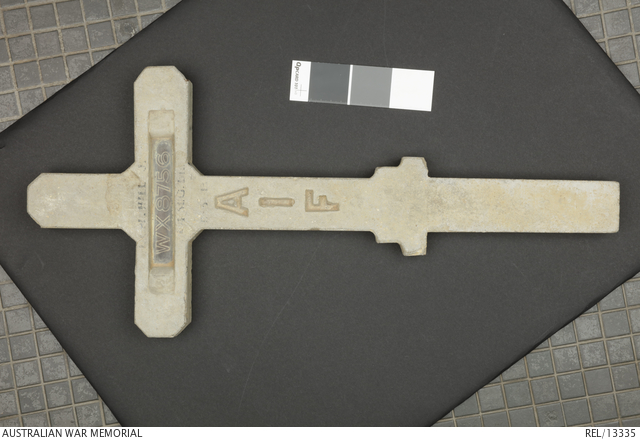 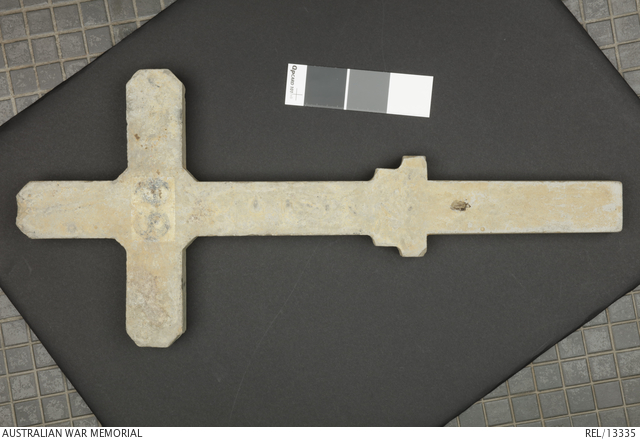 This is the hand poured concrete grave cross of Lance Corporal John Hill, an Aboriginal Australian soldier of the Second World War. John was born on New Years Day 1912 (1st January) in Fremantle, Western Australia to Arthur and Margaret Hill. At age 28 Hill enlisted into the Australian Imperial Force (AIF) at Claremont on 23 October 1940, listing himself as single, his occupation as truck driver and locality as Norseman. He was given the rank of Private and service number of WX8756 and then posted to B Company of the Western Australian raised 2/4th Machine Gun Battalion.

After his initial training Hill was sent to the Motor Transport (M/T) school at Claremont and Karrakatta in early to mid 1941 to attain the qualifications and experience required to obtain a military drivers licence. The courses also included appropriate mechanic skills for John to use on vehicles used by the Battalion. It is likely at this location that he was first acquainted with his first Armoured Fighting Vehicle, the British designed Universal (Bren) Carrier, a small open topped and lightly armoured fully tracked multi-purpose vehicle that were issued on limited numbers to Australian Infantry Battalions such as the 2/4th Machine Gun Battalion.

His unit was moved to Darwin in the Northern Territory in mid-1941 and they experienced a poor time there with seemingly little direction from higher authorities as to their role in the war.

Hill was promoted to Lance Corporal (L/CPL) 28 November 1941 and at this rank on 30 December 1941 he embarked for overseas service disembarking eventually in Singapore (via Batavia in the Dutch East Indies) on 24 January 1942. At this initial stage of the Pacific War the Japanese onslaught into Malaya and other areas in Asia and the Pacific had been rapid. The 2/4th Machine Gun Battalion were destined to never serve in mainland Malaya, their fate resting in the island of Singapore. For their first battle, the 2/4th Machine Gun Battalion were given a critical role in the defence the vulnerable north and north western approaches to Singapore over the narrow stretch of water dividing it from Malaya, the Straits of Johor. Following a heavy, accurate and sustained artillery barrage by the Japanese the first waves of 13,000 Imperial Japanese troops began to cross the straits shortly before 8.30pm on the night of 8 February 1942. The 2/4th Machine Gun Battalion poured tens of thousands of .303 bullets into the attackers, causing heavy casualities amongst some Japanese units. Due to the overstretched formation of the outnumbered Australian defenders of the north west beaches of Singapore they fell back inland, with the Japanese quickly capturing the nearby key airfield of Tengah. The following week of fighting across Singapore was confusing for the defenders with the Japanese never ceasing to apply continual heavy pressure from both the air and ground to the British Commonwealth forces.

On 14 February 1942 the fighting was on the outskirts of the Singapore city itself. Along the southern coastal ridges and villages to the immediate west of the city was the 1st Malaya Infantry Brigade (consisting of the 2nd Loyal Regiment and 1st Malaya Regiment) and the 44th Indian Brigade. In support of them nearby was a small sub-unit of Universal (Bren) Gun carriers, of which Lance Corporal Hill was involved. Their vehicles were armed with belt fed Vickers machine guns and magazine fed Bren guns. The Western Australians provided direct fire support to their Malay, British and Indian colleagues at the battle of Pasir Panjang. Amongst the defenders that the Australians were supporting was an Malaysian-Singapore war hero, Lieutenant Adnan Saidi.

Whilst driving his Universal (Bren) Carrier and rescuing wounded comrades Hill received gunshot wounds to his head and left arm. He was able to be admitted to a field ambulance before being rushed to the 2/13th Australian General Hospital (13AGH). The following day was Chinese New Year, 15 February 1942 and the day in which the British surrendered Singapore.

Along with 15,000 other Australians he surrendered and eventually sent to the Changi prison camp precinct. Hill died as prisoner-of-war at the Australian General Hospital at Roberts Barracks Changi at around 1.30pm on 11 March 1943. His cause of death being a combination of acute Bacillary Dysentry, Mycotoxicosis and Diptheria. On Japanese orders his body was cremated and his remains were buried at Changi, Grave No.80, where this hand poured concrete cross marked his grave was placed by his mates. A funeral service was conducted by Chaplain G Polain of the 2/26th Battalion. Following the Japanese surrender in September 1945 the British and Commonwealth forces reoccupied Singapore. In 1946 those bodies interred at Changi were reburied at a consolidated Kranji War Cemetery in the north of Singapore and new uniformly designed grave markers were erected. The 2/4th Machine Gun Battalion Association donated Hill's cross, along with that of another soldier from the unit, to the Memorial after the war.