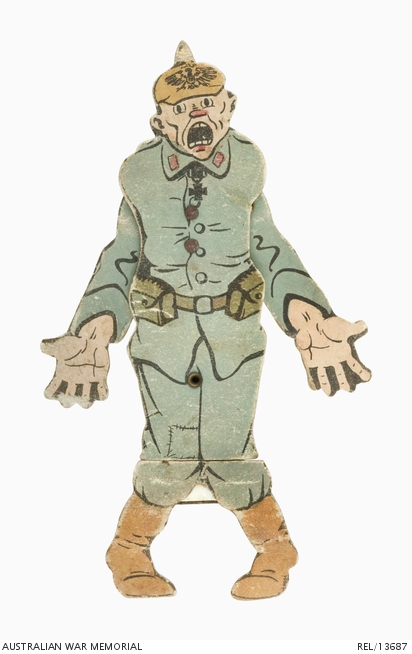 Printed cardboard cariacature of a First World War German soldier wearing field gray uniform, iron cross, ammunition belt, field boots and a pickelhaube. The figure's arms are separate and are attached to the figure on the reverse via a pair of wires and a sliding card lever with a wooden handle. The arms normally sit by the figure's sides but when the handle is pushed upwards, the arms rise in a surrendering motion and he drops to his knees. A pencilled note on the reverse of one arm reads 'The Kaiser'. The two lower legs have become detached but remain with the figure. These have since been repaired by Conservation using linen tape.

Novelty cardboard German pantin soldier puppet which performs a surrendering action, made in France during the First World War. The style of construction is a variation on the moveable paper dolls with pinned limbs joined by short lengths of string which were animated by tugging a longer string. These gained initial popularity in eighteenth century France and were known as 'pantins' and in England as 'jumping jacks'. As in this example, their subjects were often objects of fun or derision, such as the clergy or nobility. To depict your enemy surrendering is a typical patriotic response to war and in France's case, to invasion.

Although the pencilled inscription on the reverse reads 'The Kaiser', the puppet is a representation of an ordinary German soldier. However, as Kaiser Wilhelm II was viewed as the representation of the German forces, this contemporary appellation is understandable.

This example was acquired by 107 Driver William Francis Teague, born Sydney NSW on 30 June 1889, a married printing journeyman and motor mechanic from Leichhardt, NSW who enlisted on 18 April 1915, was assigned to B Company, 18 Battalion, and embarked for overseas service aboard HMAT Ceramic from Sydney on 25 June 1915. Teague saw limited service on Gallipoli before serving in France with both 18 Battalion and 2 Division HQ Motor Transport. He returned to Australia on 27 April 1919.