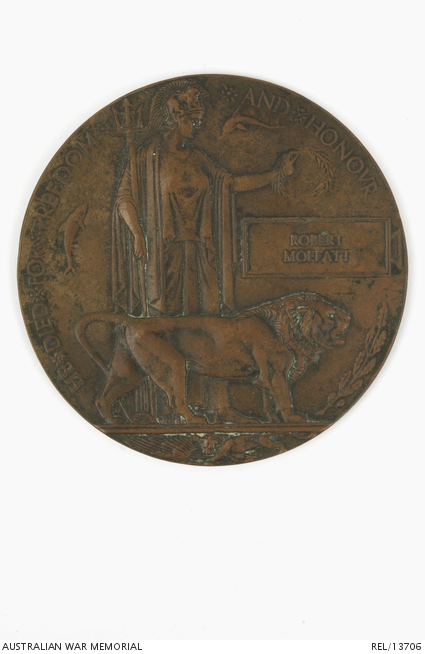 Next of kin plaque with an image of Britannia and a lion together with the words 'HE DIED FOR FREEDOM AND HONOUR'. The name of the dead soldier, 'ROBERT MOFFATT' is embossed within a raised rectangle.

This next of kin plaque was sent to the family of 121 Able Seaman (Signaller) Robert David Moffatt, 3 Company, Royal Australian Naval Reserve (RANR). Moffatt was born in Lostwithiel in Cornwall, England in 1894. He worked as an engineer in Sydney and served in HMAS Australia.

Moffatt was among the first of the RANR to offer their services to the Australian Naval and Military Expeditionary Force in August 1914 for service in German New Guinea and the surrounding Islands of the Bismarck Archipelago.

On 11 September 1914 he was part of the initial landings at Kabakaul, New Britain and during the advance towards Bitapaka, his section came under fire. Some accounts state that Moffatt was killed instantly, but in fact he was severely wounded. He died on board HMAS Australia from his wounds on 12 September at about 8 am. He was buried at sea three degrees north of Herbertshohe with full military honours at 11.30 am.