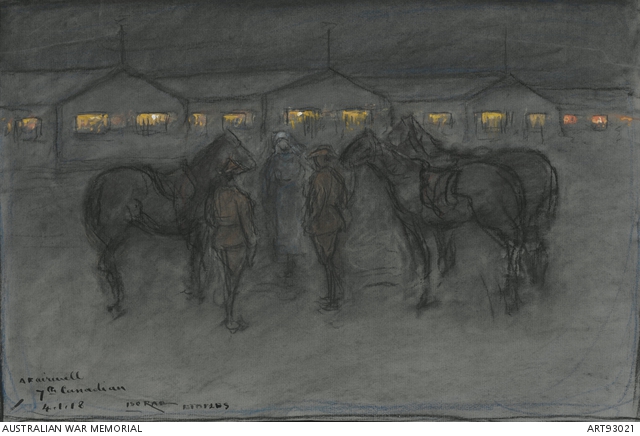 Pastel sketch of two light horsemen bidding a Voluntary Aid Detachment (VAD) nurse farewell at night fall. The troopers and nurse are standing in front of buildings of the 7th Canadian Hospital (formerly the 23rd General Hospital), at Etaples camp in northern France. The VAD is both the object of the troopers' attention and the focal point of the composition, the striking blue of her uniform breaking up the predominant brown tones of the foreground and harmonising with the deep blue evening sky. Iso Rae was one of only two Australian women artists who were able to depict the First World War at close quarters. From 1915-1919, she produced around 200 pastel drawings while working for the VAD of the British Red Cross in one of the YMCA huts at Etaples camp. Born in Melbourne, Rae trained at the National Gallery School, where her fellow students included Tom Roberts, Frederick McCubbin and John Longstaff. She moved to Paris in 1887 with her family and in 1890 joined the artists' colony at Etaples, while continuing to exhibit her paintings in the Paris salons. When war broke out, the Rae family were the only foreigners to remain in the town. Rae's drawings offer an insight into the complex support system that operated behind the lines, depicting the life of the camp in all its great variety: the different nationalities, Australians lounging in the background while German prisoners work, romance in the streets, the neatly ordered buildings of the hospital and tent lines, soldiers playing football and queuing to see movies.