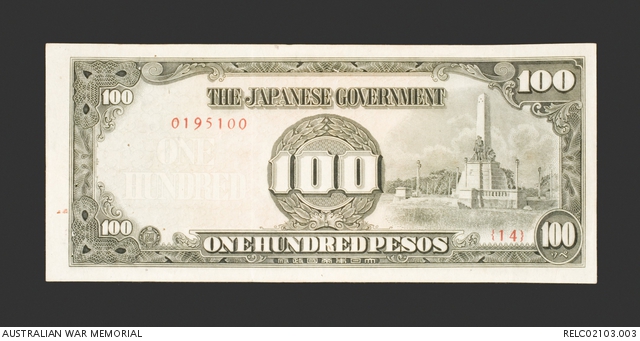 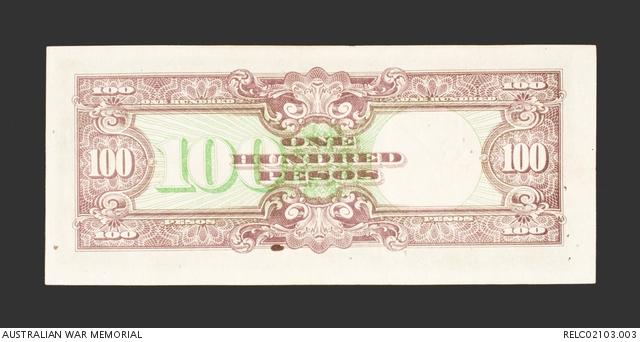 Japanese Invasion Money 100 pesos note for use in the Philippines, serial no. 14 and 0195100. This note has been circulated and has some slight brown staining on the back.

Philippine currency collected by NX16084 Lieutenant Charles Leslie Pender of 2/6 Field Regiment, AIF. Pender was born on 30 August 1906 in West Maitland, New South Wales. He served as a cadet in 13 Battalion and then as a Militia Sergeant with 2 Cavalry Brigade. A bank officer by profession, he enlisted in the AIF on 21 May 1940. On the same day he was taken on strength by 2/6 Field Regiment, and quickly appointed lance bombardier. Pender embarked at Sydney on the transport Orion on 14 November 1940, and disembarked in the Middle East in December. 2/6 Field Regiment was initially stationed in Palestine. Pender was promoted lance sergeant in February 1941, and attended Middle East School of Artillery in March. In mid 1941, 2/6 Field Regiment moved to Syria to fight Vichy French forces. Pender attended Middle East Officer Training Unit (OTU), from November 1941 to February 1942, and was promoted to lieutenant on 19 April 1942. He returned to Australia in August 1942, and was attached as PA (personal assistant) to the Chief of the General Staff, (CGS) Advanced Land Headquarters. His duties required frequent travel between Townsville, Brisbane, Melbourne and various New Guinean locations. Pender was seconded to HQ New Guinea Force from December 1942 to February 1943. He returned to 2/6 Field Regiment (Jungle Division) in September 1943, retaining this position while carrying out PA duties in other headquarters. Pender was promoted temporary captain in April 1944, and appointed PA to Commander, 1 Australian Corps (1AC). He was posted to 'G' Branch, staff of CGS, in July 1944, and remained there until September, then transferring to duties as PA to Chief of Staff, Forward Echelon Land Headquarters (LHQ). He attended LHQ Junior Staff School in Brisbane, and was then assigned as PA to Chief of Staff, HQ Morotai Force. He was then detached to Forward Echelon LHQ in February 1945. Pender was Mentioned in Despatches, for 'Exceptional services in the field in New Guinea'. Morotai Island served as a staging point for the Allied invasion of the Philippines in early 1945, and of eastern Borneo, in May and June of that year. From April to September 1945, Pender travelled constantly between Manila and Morotai. He was discharged on 6 December 1945, relinquishing the rank of temporary captain and was becoming honorary captain in the Reserve of Officers. He was appointed a Member of the Order of the British Empire (MBE) for 'meritorious service at Lae, Salamaua and Finschhafen', in 1947. Pender died on 8 February 1958. This note is from a series issued by the Japanese forces of occupation in the Pacific theatre during the Second World War. It is an example of Japanese Invasion Money intended for use in the Philippines. The serial number denotes the second issue, and these were printed by the Southern Development Bank between 1942 and 1944. A third issue was produced in 1945 as Allied Troops invaded the Japanese-controlled Philippines.