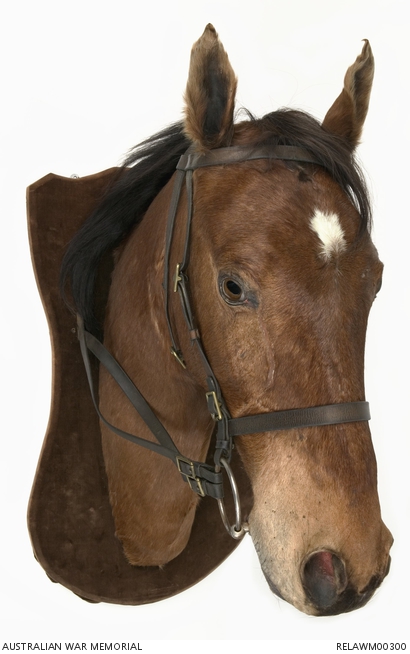 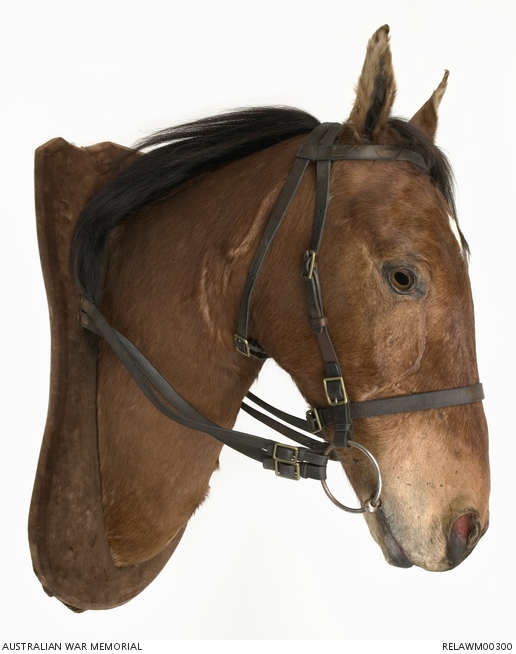 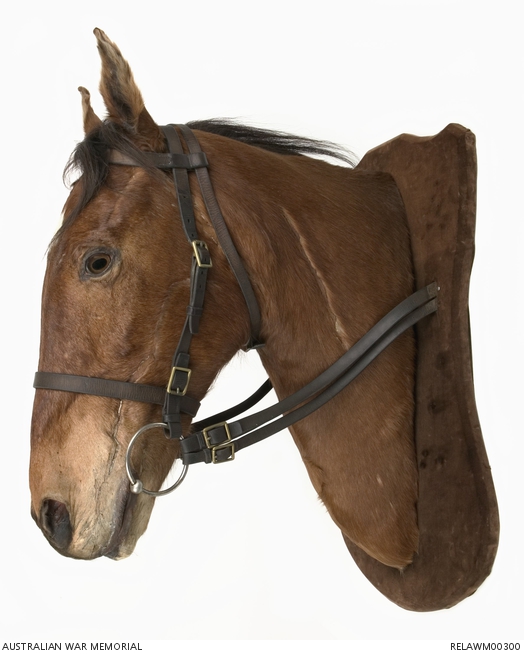 Mounted head and neck of 'Sandy', a bay horse with black points and a white star. The back of the neck is attached to a shield shaped piece of wood covered with brown velvet. Sandy wears a non-military issue brown leather slip-head bridle with a double head piece, cavesson noseband attached to the cheek pieces, and a nickel plated plain ring snaffle bit with two reins attached to each ring. The metal fittings and buckles on the bridle are brass.

Born near Tallangatta, Victoria, c. 1907, probably out of a 'station' mare and by a thoroughbred sire, Sandy, a bay 15.3 hands high gelding, was donated to the AIF as a patriotic gesture by Francis James 'Bonner' O'Donnell in 1914. Family tradition relates that O'Donnell, a devout Catholic, heeded Archbishop Mannix's instruction that Catholics should not join the AIF, and contributed his horse instead. However, his age and the fact that he was about to marry may also have been behind his gesture. Sandy was one of a number of horses owned by the O'Donnells, who operated a brickworks at Tallangatta.

Sandy was sent to the Remount Depot at Maribyrnong, on the outskirts of Melbourne, where it is thought that he was one of three horses personally selected by General William Throsby Bridges, who had been appointed to command the AIF. Sandy is said to have been his favourite horse on account of his temperament, but not his looks.

Bridges and his headquarters sailed in the first convoy from Melbourne, aboard the Orvieto, on 21 October 1914. Sandy also travelled on the ship, one of only 23 horses to do so. At some time in Egypt Bridges had Sandy formally photographed (see P05290.001), the general standing behind him so that the entire animal could be seen. His other horses, Pasha and 'the brown mare' were photographed on 23 February 1915.

Although 7000 horses were sent in transports to Gallipoli, it is not thought that Sandy was among them. Almost none were landed due to the unsuitability of the terrain, and they were sent back to Egypt in early May 1915. General Bridges was mortally wounded at Gallipoli on 15 May and died at sea on 18 May, before he could reach hospital in Egypt. He was initially buried in Alexandria, but his body was exhumed and returned to Australia. After a memorial service in Melbourne in September Bridges was buried on the slopes of Mt Pleasant in Canberra, overlooking the Royal Military College he had commanded before the war.

In Egypt Sandy was allocated to Captain (later Lieutenant Colonel) Leslie Whitfield, an army veterinary surgeon, on 1 August. When Whitfield was appointed Assistant Director of Veterinary Services to the 2nd Division in March 1916, Sandy was shipped to France with him. Sandy's subsequent history on the Western Front is unclear. Whitfield was posted to command the Australian Veterinary Hospital at Calais in April 1917. In October, Senator George Pearce, the Australian Minister for Defence, asked that Sandy be returned to Australia, his idea apparently being that the horse should be turned out to graze at Duntroon, close to General Bridges' grave. Sandy was finally shipped from Calais to the British Remount Depot at Swaythling, England in May 1918 where he underwent quarantine. Declared free of disease he boarded the freighter Booral in Liverpool, accompanied by his groom, Private Archibald Jordon.

Sandy arrived in Melbourne in late November. The 'Melbourne Argus' reported, on 11 December that 'after four years honourable service he has been brought back - partially blind and altogether less sleek and fiery than when he went away - to spend his remaining days in the well-grassed paddocks near his master's grave. All the men in the Australian First Division knew "Sandy", a well-bred upstanding bay, his appearance commanded admiration and the late General Bridges was immensely proud of him...after his master's death he found another owner. Later he was sent to France, where, after many stirring experiences he was gassed, after his rider killed by a shell fragment. "Sandy" did not die but the skill and care of the surgeons were powerless to save his eyesight.' If the 'Argus' story is true Sandy must at some time have been allocated to another officer in France as Whitfield survived the war and in any case was a non-combatant.

Sandy's reported debility may have been the reason why he spent the rest of his days at the Maribrynong Remount Depot instead of travelling to Canberra. In 1923 his condition deteriorated and a decision was made to put him down 'as a humane action'. A proposal was made to preserve his hide and mount it as an exhibit for the Australian War Museum (later War Memorial) but this was vetoed on the grounds of cost and because, according to General Sir Harry Chauvel, the horse had never seen active service. This statement is at variance with the 'Argus' claim that he had. In the event there was then no taxidermist in Australia with the skill to prepare and mount such a large animal. Mr Barnes, the taxidermist at the Australian Museum in Sydney, travelled to Melbourne to measure Sandy in life before later preparing his head and neck for display. Concerned that his work might have been considered below standard Barnes was at pains to point out that Sandy had been a plain looking horse in life. The finished head closely matches that of photograph of Sandy that was taken in Egypt.