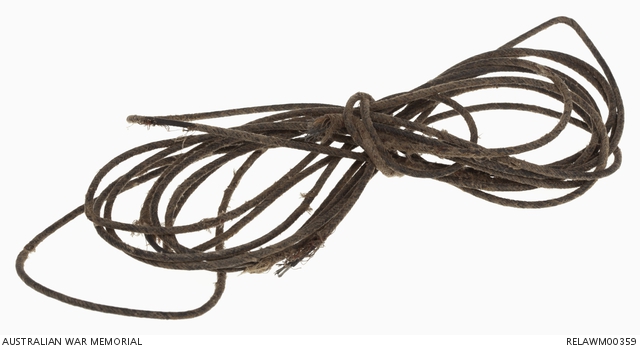 Coiled length of Turkish telephone wire. The wire is encased in a fabric covering for insulation.

Telephone wire collected from a Turkish observation post on the heights of Achi Baba. Posts on this hill overlooked the British and French positions at Cape Helles throughout the Gallipoli campaign and many unsuccessful attacks made on the village of Krithia were intended as a prelude to the capture of the hill.

The wire was collected by Official Historian C E W Bean on 9 March 1919 while he was with the Australian Historical Mission (AHM) to Gallipoli. The AHM visited the Peninsula from February to March 1919 to collect items for the nation, to record the area through artworks and photographs, and to explore the battlefields to answer some of the 'riddles of Anzac' for the Australian official history of the war.