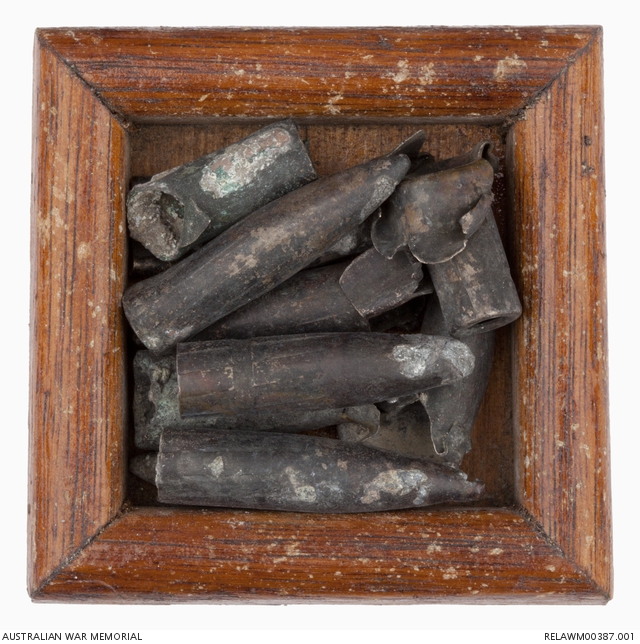 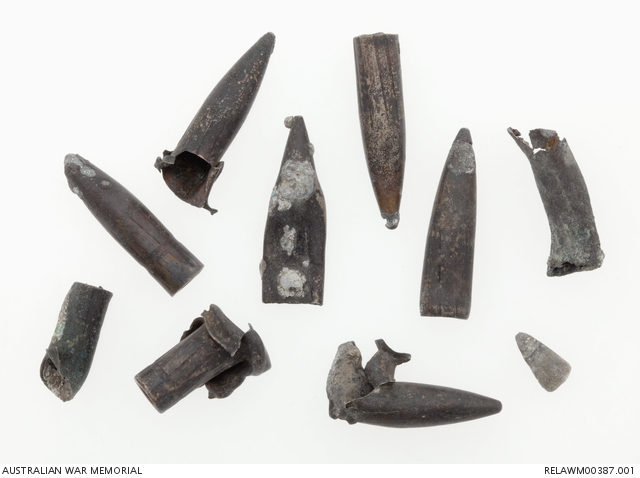 These projectiles were found on 22 February 1919 at Hill 60, Gallipoli, by members of the Australian Historical Mission (AHM). The AHM, led by Official Historian C E W Bean, visited Gallipoli from February to March 1919 to collect items for the nation, to record the area through artworks and photographs, and to explore the battlefields to answer some of the 'riddles of Anzac' for the Australian official history of the war.

They were found in the remains of an old oak tree which was burnt during the attacks on Hill 60 in August 1915. The tree was located in front of the Turkish positions attacked by the Australian 4th Infantry Brigade on 21 and 27 August 1915. The attack on Hill 60 on 21 August consisted of Indian, British, New Zealand and Australian soldiers. The Australian 4th Brigade was ordered to attack Turkish trenches on the eastern side of Hill 60. There were two oaks near these trenches; the larger, older oak and a younger, smaller oak, located near each other. The 4th Brigade initially attacked the trench on 21 August but only about 80 men from the first two lines of the attack (which consisted of about 300 men) managed to reach a slope below the old oak. They could not continue without further support and waited for the next line of attackers. However, the third line of Australians could not reach them, nor could men from the 10th Battalion, Hampshire Regiment, who attempted to advance to their location. Unable to move further forward, the Australians near the oak dug in, about 64 metres away from the nearest Turkish trench. Further fighting to the west occurred the following day, featuring the recently arrived 18th Battalion AIF, but Hill 60 was not captured. During the fighting, artillery fire caused fires to break out in the area, which burnt scrub in the area and the larger oak. A number of wounded and dead soldiers were also burnt by the fire, or if they tried to escape, they were shot by the Turks.

On 27 August Hill 60 was attacked again, with the 4th Brigade ordered to attack the same Turkish trench, which was marked as trench 'A' in the maps issued, along with the Turkish trenches to the west of trench 'A', marked as 'B1', 'B2' and 'B3'. Hill 60 was heavily shelled before the attack was launched. However, the Turkish trenches opposite the 4th Brigade were not bombarded. As a result, when the first line, consisting of men from the 14th Battalion, attacked from the advanced trench created on 21 August, the line was decimated. Only Captain George Cooper and eight men reached the small oak and lay there sheltered by a low hedge, unable to advance further but eventually managing to crawl back to the advanced trench. Colonel John Adams, having lost two-thirds of his men and all his officers, except Cooper, did not call upon his reserves and the fighting on this flank ended quickly.