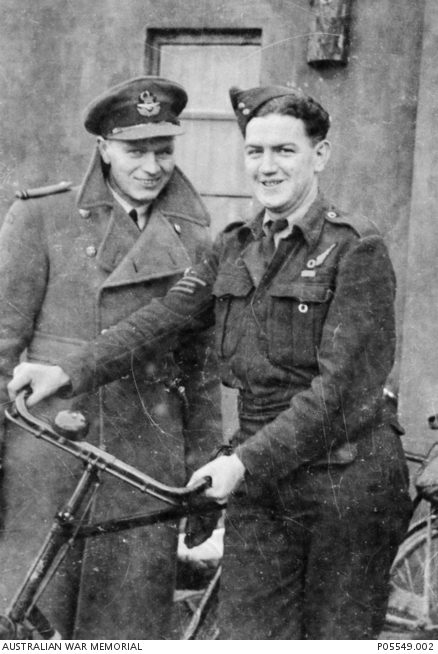 Informal portrait of 404487 Flight Sergeant (Flt Sgt) Thomas John O'Donohue DFM, RAAF (right), and one of his pupils, Flying Officer McKinnon, RCAF. Flt Sgt O'Donohue joined the RAAF in September 1940 and trained as an Observer / Navigator. He completed a tour of operations with 150 Squadron RAF and 460 Squadron RAAF between October 1941 September 1942, and was awarded the Distinguished Flying Medal. Later commissioned, O'Donohue was killed in action over Rangoon, Burma, on 29 February 1944, when his Liberator was shot down.He was serving as a navigator with 159 (Liberator) Squadron, RAF. An inscription on the back of the photograph notes that it was the last photograph taken of O'Donohue before he was commissioned as an officer.