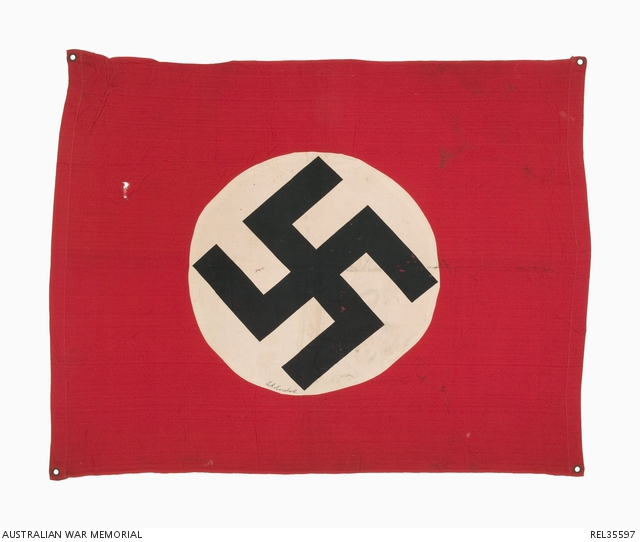 A red cotton flag with a brass grommet of 9mm diameter in each corner. Appliqued at the centre of one side is a white disk on which is a black swastika. 'J A MARSHALL' has been signed in black ink on the white disk below the swastika.

Vehicle flags were secured to the roofs and bonnets of German vehicles in the earlier stages of the Second World War to provide identification to friendly aircraft. Later, as the Luftwaffe gradually lost air supremacy, this practice was largely discontinued.

This flag is associated with Colonel (later Major General) C E M 'Gaffer' Lloyd who was the Chief of Staff to Major General Sir Leslie Morshead during the siege of Tobruk. It was at Tobruk that Colonel Lloyd acquired the flag. Charles Edward Maurice Lloyd was born on 2 February 1899 at South Fremantle, Western Australia. Charles entered the Royal Military College, Duntroon, Federal Capital Territory, in February 1915. Fellow cadets nicknamed him 'Gaffer' because of his serious demeanour.

On 13 October 1939 Lloyd was seconded to the Australian Imperial Force and was assistant quartermaster general, I Corps, when he sailed for the Middle East in May 1940. His record in North Africa cemented his reputation as a capable professional and a staff officer 'of uncommon intellectual gifts'. He was appointed CBE (1941). In January-February 1942 he was deputy intendant-general in General Sir Archibald (Earl) Wavell's Australian-British-Dutch-American Command, Netherlands East Indies. Back in Melbourne, Lloyd reverted to brigadier and was made director of staff duties, Allied Land Forces Headquarters, South-West Pacific Area (SWPA).

In February 1943 the commander-in-chief General Sir Thomas Blamey appointed him adjutant-general at LHQ. Once more a temporary major general, Lloyd was entrusted with rejuvenating this key staff branch. He flew to London in July 1945 to represent Australia at a conference on the reorganization of the SWPA. He left the army and was placed on the Reserve of Officers on 25 February 1946 as honorary major general; he had been mentioned in dispatches three times in 1941-42. He died of jaundice on 31 May 1956 in the Repatriation General Hospital, Hollywood, Perth.