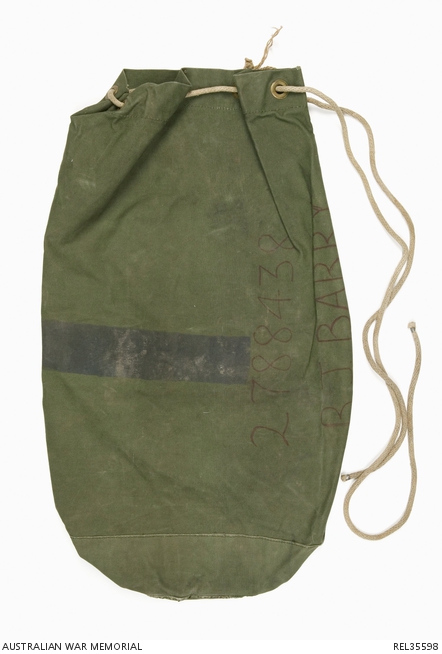 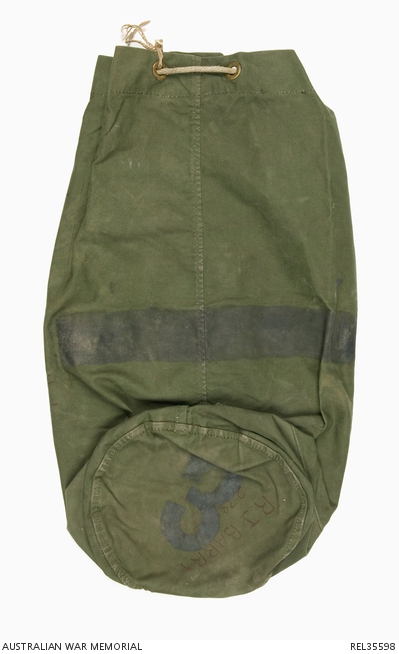 Cylindrical green canvas kitbag. The bag has a drawstring opening with eight brass eyelets and an internal flap used to secure the contents when the bag is drawn shut. Stamped inside the bag is '3465-66-023-8411 W.P.C. (broad arrow) 1967'. Both the body and the base are marked in red '2788438 R. J. BARRY', but the majority of Barry's service number on the base is obscured by a large painted 3. A large black stripe has been painted around the body of the bag.

Initial issue equipment associated with the Service of 2788438 Private Richard Joseph Barry. Barry was born on 16 March 1947 in Sydney, NSW and was eligible for the National Service Scheme, which operated in Australia from 1964-1972. The scheme was based on a birthday ballot of twenty-year-old men who had registered their names with the Department of Labour and National Service (DLNS). If balloted in, these men were called up to perform two years' continuous full-time service in the Regular Army Supplement, followed by three years' part-time service in the Regular Army Reserve. National servicemen on full-time duty were liable for what was called 'special overseas service', which included combat duties in Vietnam. Barry registered with the DLNS at the beginning of March 1967. The ballots were held twice a year after the close of each registration period to select those to be considered for call up. Barry's date of birth was drawn during the fifth National Service ballot, which was held on 10 March 1967. He underwent a medical exam and interview on 31 July to see if he would be fit for service. Barry received his call up notice on 13 September, which required him to present himself to Colonel Oxley at 3 Training Battalion (3 TB), Singleton on 4 October at 4pm. There Barry was allocated for ten weeks basic recruit training and became a part of the 10th National Service Intake out of the thirty that were eventually established. After completing basic training Barry was automatically promoted from a Recruit to a Private. He chose the Armoured Corps and the Artillery Corps as his first and second choices respectively for Corps training. However Barry was allotted to the Infantry Corps. He undertook ten weeks Infantry Corps Training at Singleton from 15 January to 28 February 1968. Barry was then given a choice about which unit he wished to be posted to. Barry decided to join 6 RAR at the newly constructed Laverack Barracks in Townsville. On arrival, in March 1968 Barry was allotted to Anti-Tank Platoon, Support Company. During his time there Barry undertook a Visual Tracking Course from 24 May to 10 June and a Combat Tracking Team Course from 13 to 24 June. At the end of June Barry was appointed as a Visual Tracker rifleman. He then undertook a Long Range Patrolling Course from 9 September to 4 October. On 8 May 1969 6 RAR embarked aboard HMAS Sydney for Vietnam part of 6 RAR's second tour of duty. The unit arrived at Nui Dat on 19 May and was renamed 6 RAR/NZ (ANZAC) Battalion to reflect the inclusion of two Royal New Zealand Infantry Regiment rifle companies, two sections of mortars and two assault pioneer sections. Barry served with 6RAR in Vietnam until 3 September 1969 when he flew to Sydney via Saigon, arriving in Australia on the morning on 4 September. Barry was formally discharged on 3 October 1969 having completed the prescribed period of two years continuous full-time service in the Regular Army Supplement.