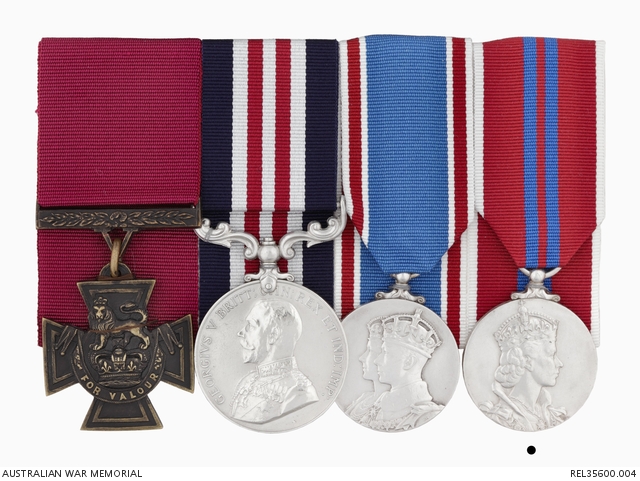 Bernard Sidney Gordon was born in Launceston, Tasmania on 16 August 1891. He was working as a cooper's machinist when, at the age of 24, he enlisted as a private with 41 Battalion on 27 September 1915 in Townsville, Queensland. Gordon embarked from Sydney aboard HMAT Demosthenes in May 1916. After a period of training in England he proceeded to France, joining his unit on 5 January 1917. Gordon soon demonstrated his considerable courage and initiative while fighting on the Western Front. However, he was not always a model soldier when out of the line and was reprimanded on several occasions for being absent without leave and for behaviour 'prejudicial to good order and military discipline'. Gordon was wounded in action in October and promoted to lance corporal in June 1918. He was awarded the Military Medal for his gallant conduct during action near Hamel in August. The citation reads 'On the 8th, August, 1918, during the attack East of HAMEL, Private GORDON single handed attacked a machine gun crew which was holding up his section. He killed the crew and captured the gun. Later on in the day he stalked and killed an enemy sniper. Throughout the operation he displayed much bravery and devotion to duty.'. Less than three weeks later came the daring action at Fargny Wood for which he was awarded the Victoria Cross. His citation reads 'For most conspicuous bravery and devotion to duty on 26th-27th August, 1918, east of Bray. He led his section through heavy shell-fire to the objective which he consolidated. Single-handed he attacked an enemy machine-gun which was enfilading the company on his right, killed the man in the gun and captured the post, which contained one officer and ten men. He then cleaned up a trench, capturing twenty-nine prisoners and two machine-guns. In cleaning up further trenches he captured twenty-two prisoners, including one officer, and three machine-guns. Practically unaided, he captured, in the course of these operations, two officers, and sixty-one other ranks, together with six machine-guns, and displayed throughout a wonderful example of fearless initiative.'. A few days later Gordon was again wounded in action during fighting in the Mont St. Quentin area, receiving shrapnel injuries to his face and hand. It was during his time recovering in hospital that he learnt he had been awarded the Victoria Cross. 'Barney' Gordon, as he was known to his family, returned to Australia in January 1919 and was discharged in April. He settled in Queensland and took up dairy farming on a property near Beaudesert. During the Second World War Gordon served for a period with Queensland's 31 Battalion (Kennedy Regiment) but did not leave Australia. He was one of the Australian VC recipients who visited the United Kingdom in 1956 for the centenary celebrations of the Victoria Cross, and died in 1963, aged 72.