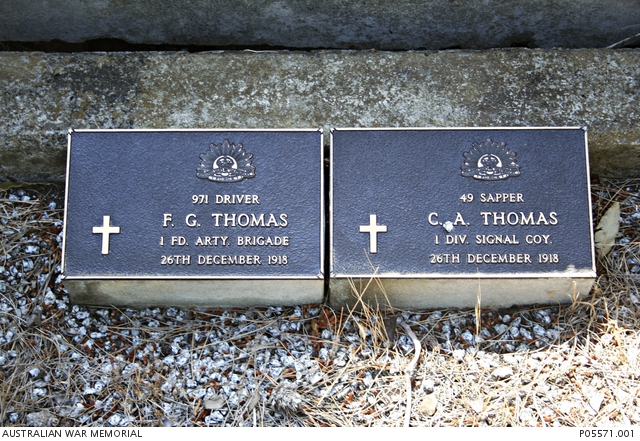 Two granite headstones of brothers 971 Driver (Dvr) Frederick George Thomas, 1 Brigade Australian Field Artillery and 49 Sapper (Spr) Charles Albert Thomas, 1 Divisional Signals Company. Dvr Frederick Thomas of Prahran, Vic, worked as a iron worker,s assistant prior to enlisting aged 22 years on 19 August 1914. He embarked from Melbourne aboard HMAT Shropshire on 20 October 1914. Dvr Thomas served at Gallipoli and on the Western Front. In December 1916 he was transferred from France to hospital in Bristol, England, for the treatment of Quinsey (abscesses in the throat, which then turned to pneumonia). He was married on 4 July 1917 to Mary Bywater at the Bristol Registry Office and a week later, fined four days pay for overstaying his marriage leave by one day. In December 1917 he returned to duty in France. On 15 September 1918 Dvr Thomas was designated to return to Australia aboard D22 for submarine guard duty. Spr Charles Thomas, of Prahran, Vic, worked as a boilermaker prior to enlisting aged 19 years on 1 September 1914. He embarked from Melbourne aboard HMAT Orvieto on 21 October 1914. Spr Thomas was mentioned in despatches for his good work and bravery on 12 to 14 December 1915 at Gallipoli and again in France in January 1917. Whilst on duty in France he was court martialled for striking a superior officer whilst in the execution of his duty. He was awarded 28 days forfeiture of pay and reverted to the rank of sapper. Spr Thomas returned to Australia on 'special 1914 leave' in the 'B' draft sometime late in 1918. Both brothers were killed on 26 December 1918 at Newport, Vic. The Coroner's Report states 'On the 26th December 1918, at O'Hara's crossing, Newport, they died of injuries sustained by a collision between the 2am goods train and a vehicle in which the deceased were riding at the time. I decide that death was due to accident and no blame attributable to the Railway Officials'. The Army made arrangements for the funeral and the burial took place at the Williamstown Cemetery on Saturday 28th December with full military honours.