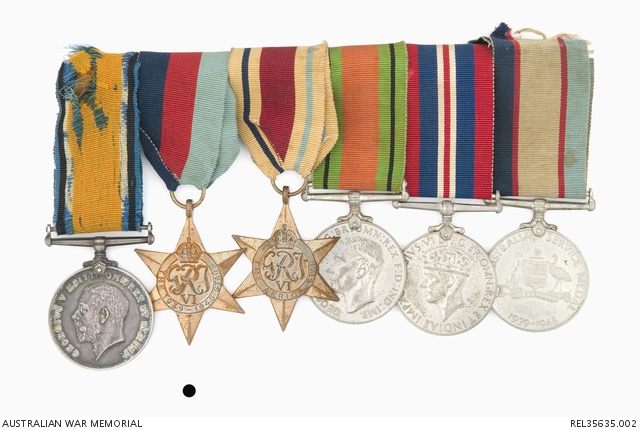 Associated with the service of 5044 Private Robert Lawrence (also spelt Laurence), born in London, England on 14 December 1901. Lawrence, claiming to be an 18 year old station hand, enlisted for service in the AIF on 14 March 1917. He joined 30 Battalion and sailed from Sydney aboard HMAT Marathon on 11 May 1917. After arriving in Devonport, England on 20 July 1917 Lawrence marched in to 8 Training Battalion and was later transferred to 14 Training Battalion on 5 November. He was sent back to Australia aboard HMAT Suevic on 21 April 1918 when it was discovered that had lied about his age on his attestation papers and was actually only 16 when he enlisted. After the war Lawrence became a bricklayer and went on to enlist for service in the Second World War on 23 May 1940. He was assigned the service number NX16806 and served in the Middle East as a sapper with 2/5 Field Company. On 22 September 1941 he was taken to 2/1 Casualty Clearing Station suffering from sand fly fever, returning to his unit on 1 October. Lawrence returned Australia in March 1942 and was hospitalised several times suffering from stomach ulcers before being discharged as medically unfit on 16 April 1943.