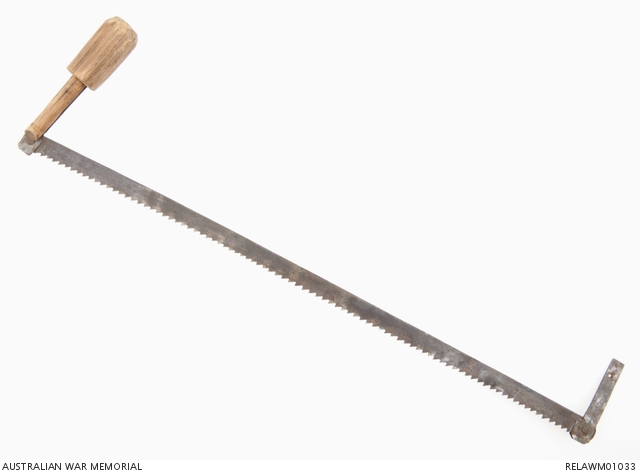 Steel hacksaw hand-made from a corset busk. The saw is fitted with a 10 mm wide blade serrated along the top edge only. Metal arms are attached to the blade at right angles, which then fit into wooden handles, of which, only one is present.

Associated with the service of 245 Private Herbert Horner. Horner was born in Riverton, South Australia in 1874 and was working as a farmer when he enlisted in the 4th Machine Gun Company, AIF, on 24 February 1916 aged 41. He embarked for England on 18 July aboard HMAT Seang Bee with the company's 3rd reinforcements. Horner proceeded overseas from England to France, arriving at the Machine Gun Base at Favreuil on 3 December. Horner transferred to the 3rd Machine Gun Company on 18 December.

Horner was taken prisoner during the First Battle of Bullecourt on 11 April 1917 . He was reported missing in action by his Commanding Officer on 15 April, but was not officially confirmed as a prisoner of war until 2 June. Horner was initially interned at Friedrichsfeld in Germany before transferring to Gustrow in December 1917. This saw was made by a Russian prisoner of war, also interned at Gustrow.

Horner worked at the Gustrow Sugar Factory for two weeks in January 1918 before being sent to Billenhagen where he worked in a forest collecting firewood. Horner was then sent to Tessin where he worked on a local farm feeding cattle, horses and collecting firewood. He was transferred to another farm in Weteindorf from which he escaped. However, he soon after handed himself in to the authorities. He remained at Weteindorf until the end of the war.

Horner returned to the main military camp at Gustrow to await repatriation via Denmark. He arrived in Copenhagen in December 1918 and sailed for England aboard SS Frederick VIII, arriving on 30 December. He sailed for Australia aboard HMAT Marathon on 19 April 1919 arriving in Western Australia on 31 May.