Turkish pontoon used in the attack on the Suez Canal: captured by 3 Field Company, Australian Engineers 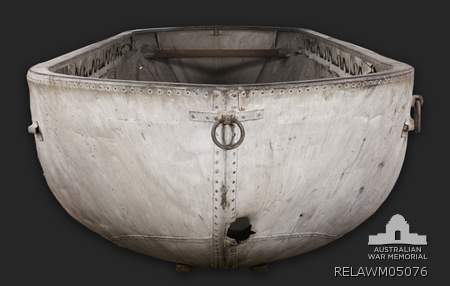 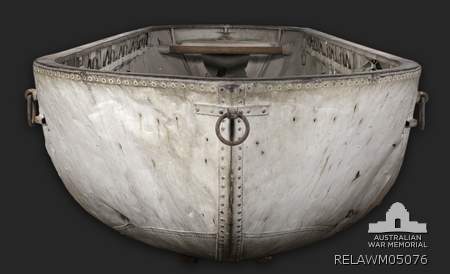 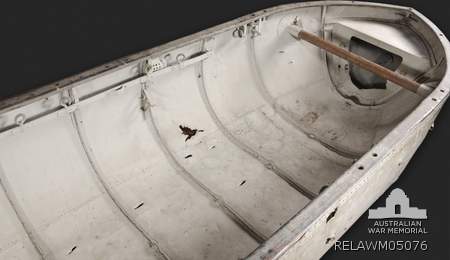 Double ended bridging pontoon, 7.5m in length, constructed from 20 gauge galvanised iron plate (0.9mm). The pontoon has 13 transverse steel frames, onto which the outer hull plating is rivetted. The hull is formed from 3 horizontal strakes: a garboard strake which forms most of the lower part of the hull, and each side near the turn of the deadrise is formed from another single strake. Each strake is itself formed from a number of sheets which are lap rivetted together. The strakes are also lap rivetted to each other, with the lower part of the upper side strakes being on the inside of the garboard strake (ie the strakes are reverse lapstrake). The rivets are domeheaded, of small diameter. The gunwales are formed from 'C' channel angle. Although both ends are identical in plan and profile, one of the ends contains a compartment which appears to have been formerly sealed with a door. This was, when captured, full of rack lashings and ropes. For the purposes of identification, we will term this the bow.

The hull contains many perforations. Around 10 such perforations are regular in shape, about 75mm long x 10 mm wide and appear to have been made from the inside of the pontoon by an axe or mattock. Six other perforations are larger, 100 x 100, of a squarish shape, and have been also made deliberately. On the port side of the boat are a number of small arms perforations. The stem of the bow shows a larger calibre perforation. A large jagged perforation is also found on the port side of the boat. The bow and stern have both been re-inforced with an athwartship round section timber stretcher, 75mm in diameter. This timber is fastened into a metal collow on the inside of the hull between the first and second frame, and between the 12th and 13th frames. Running fore and aft from the third frame to the 11th is a steel stringer to which are attached hooks. These were for lashing the road bearers. Brackets for aors are mounted on the inside of the hull. Holes for 6 sets of rowlocks peirce the gunwale on the bow and stern quarters. Inside the pontoon, near the craft's floor, a steel tube 100mm long and 75mm internal diameter is mounted on both the port rear quarter and the starboard bow quarter. This was for the purpose of fixing an upright wooden pole, which probably served as either part of the bridge handrail or was used to help manouever the craft.

Mounted onto each side of the pontoon on the bow quarter, midships and stern quarter, are mooring rings, of 105mm diameter. A similar sized towing ring is fitted to bow and stern. The hull is coated inside and out with a flat white paint.

This is one of the 24 pontoons used by the 4th Turkish Army in their attempt to cross the Suez Canal on 3 February 1915. The Turkish force of an estimated 10,000 had travelled from Jerusalem to Kantara, a distance of 200 miles. The force was composed of 5 percent Germans, 10 percent Turks, and 85 percent Bedouins, and was aimed at raising anti-British feeling within the protectorate of Egypt, inciting a Jihad and denying use of the canal to Allied forces. This potential threat forced the British to base up to 70,000 troops in Egypt, 30,000 of them defending the Canal.

Initially, the Turks had three options; to attack from the Jordan – Mediterranean coast to Kantara, through the Sinai from Beersheeba to Ismalia, or from the south to Suez. Thus, the British were obliged to keep options open, defending all three zones along the 159 km of canal until it became obvious the Turks were marching south west from Beersheeba, heading for the central zone, at Ismalia, straight across the Sinai Desert.

Despite being initially unconvinced that the Turks could actually organise such a crossing, the British were aware of the intent; they decided to base their forces on the West Bank of the Suez, using the canal as part of the defence, bolstered by Royal Navy ships. This essentially meant giving up the Sinai.

The force opposing the Turks mainly comprised of the 10th and 11th Divisions, Indian Army. The New Zealand Wellington and Otago Battalions, however, assisted in the defence. The 3rd Field Company Engineers, AIF were detached to operate searchlights and the Ismalia powerhouse, but no other Australians were involved directly in the defence. The majority of defenders were hidden by high spoil banks thrown up on west bank during construction of the Suez Canal.

Small parties of Turks were spotted by a French seaplane on 15 January – but they missed most of the force heading out of Beersheeba and across the Sinai. This move was unexpected, as most armies had moved along the coast. The Turks sent smaller parties to the southern & northern routes as a diversion and to keep the British guessing. The central party physically dragged their pontoons (on wagons) and artillery across the desert.

Early on the morning of 3 February about 3:30 am, movements and sounds were noticed by the defenders on the eastern bank and the Indian sentries started shooting. After dying down, more sounds were noted a kilometre south. A Turkish pontoon landed on the west bank, loaded with 25 Turks. This was charged by Punjabis and all the occupants were killed; a second crossed under fire but landed with only 10 survivors – four were captured in the morning. Pontoons were raked with shrapnel and machine gun fire, killing all aboard. Many more were targeted on the east bank as their crews attempted to launch them, with heavy casualties. Witnesses noted ten or eleven damaged pontoons drifting, full of dead. Survivors tried to hide behind pontoons and make a dash for safety – many of these killed as well.

Orders were given for Torpedo Boat 43 to blow up remaining intact pontoons. At the same time, unaware of the disaster, and hearing that some pontoons had already crossed, the Turkish commander sent up thousands of reinforcements. The British Territorial artillery spotted them and started shooting, as did the guns of the French battleship Requin. An Indian counter-attack across the Canal took 250 prisoners and the attack ceased. The British had lost just on 160 men – the Turkish toll was ten times higher. The Turks retreated back across the desert. The Turkish performance at the Canal may have coloured Australian, British and Indian attitudes to Turkish fighting ability which they brought to Gallipoli, to their cost.

This pontoon was amongst those the Turks abandoned on the east bank of the canal, near Serapeum and Toussoum, 89 km from the entrance to the canal. The action in which it was captured was the first in which a unit of the AIF (3 Field Company Australian Engineers) was engaged, and as such this trophy was the first captured by the army. The deliberate damage inflicted on the pontoon is specifically referred to in the engineer's diary, where it notes that the pontoons abandoned by the Turks were disabled by the British to prevent their re-capture and re-use in another crossing attempt. The diary notes also that these were standard German pontoons.

It was temporarily displayed, with one or two others, in the Cairo Zoological Gardens at Giza from 1915 and by May 1918, the Australian War Records Section was lobbying for an example to be brought back to Australia, noting that while Australian involvement by 3 Field Company Engineers was small, it was important. The actual legwork was undertaken Lieutenant Dinning of the Cairo branch of the AWRS who had this pontoon transferred to Australian forces based at Moascar, and afterwards transported back to Australia aboard an as yet unidentified ship.