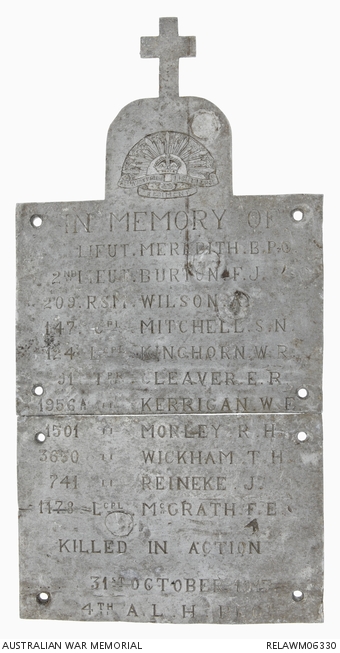 Aluminium grave marker in two pieces, which are intended to be placed one above the other to form a whole. Each section has a hole drilled in its four corners, to allow it to be screwed to a decorative metal cross of local Palestinian manufacture, which can be seen in Photograph H02322. The upper section is surmounted by a cut out cross with an engraved 'Rising Sun' badge beneath it bearing the words '4TH AUSTRALIAN LIGHT HORSE REGIMENT' on its scrolls in place of the usual 'Australian Commonwealth Military Forces'. Stamped into the metal underneath the badge is 'IN MEMORY OF/ LIEUT. MEREDITH. B.P.G./ 2ND LIEUT. BURTON. F.J./ 209. R.S.M. WILSON. A./ 147. CPL. MITCHELL. S.N./ 124 LCPL. KINGHORN. R.W./91 TPR. CLEAVER. E.R./ 1956A [TPR] KERRIGAN. W.E.'. Stamped into the metal of the lower section is '1501 [TPR] MORLEY. R.H./ 3650 [TPR] WICKHAM. T.H./ 741 [TPR] REINEKE.J./ 1178 LCPL McGRATH. F.E./ KILLED IN ACTION/ 31ST October 1917/ 4TH A.L.H. REGT.' All the names are listed vertically, one man to each line. Where 'TPR' (trooper) appears in square brackets it means that the word is indicated by a ditto mark (") in the actual plate.

This grave marker, made by Warrant Officer II James Isaac 'Jim' French, of 4 Light Horse Regiment from material cut from an old tank, was placed on an ornamental cross made by local Palestinian craftsmen, which marked the position of the mass grave for the eleven members of the regiment who had been killed in the charge at Beersheba on 31 October 1917.

According to a letter written in July 1918 by French's father to Miss Cleaver, the sister of Trooper Cleaver who is listed on the plaque, Jim French was given permission to travel from Gaza to Beersheba with a small party of men to erect the marker and other wooden crosses in the cemetery. Evidence from the regiment's War Diary suggests that this must have occurred at the end of February or beginning of March 1918 when the regiment spent nearly three weeks in the Gaza area engaged in 'salvage' work.

The bodies in the mass grave were exhumed by the Imperial War Graves Commission in Palestine in 1924 and given individual graves in the Beersheba War Cemetery, on the same site as the original cemetery, which had been made immediately after the fall of the town in 1917. The plate which had marked the mass grave was forwarded to the Australia for preservation.

French's father thought that his son had also made the ornamental backing cross on which the marker was placed but as the pattern is typical of Palestinian craftsmanship of the period this seems unlikely. French assumed that all eleven men who had died in the Charge had been killed in action and marked his plaque to this effect. In fact, three men died of wounds soon afterwards. One of these was Trooper Harold Thomas Wickham, who may have been the youngest light horseman to die in Palestine. Claiming to be a 21 year old farmer, he had enlisted in Victoria in March 1917 under the alias surname Wickham, naming his 'uncle' (in fact his father), Thomas Bell, as his next of kin. Wickham was sixteen when he died on 1 November 1917 from the effects of Turkish machine gun fire sustained during the Charge, which had resulted in multiple fractures and blood loss in one leg.