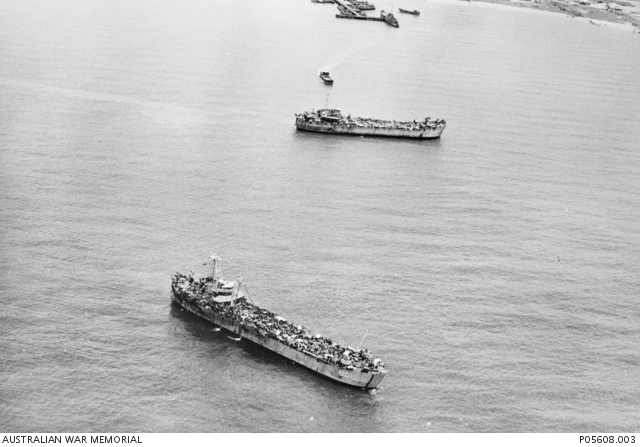 Two South Vietnamese landing craft approaching An Thoi harbour, an ex United States Navy base on Phu Quoc Island, approximately 300 kilometres west of Saigon. Each vessel is packed full with South Vietnamese refugees fleeing from the North Vietnamese Army (NVA), who were then in the process of overrunning the northern towns and cities of South Vietnam. An Thoi was established as a refugee camp and several airlifts containing humanitarian aid were made there by RAAF C-130 Hercules aircraft operating from Saigon. This image was taken from the flight deck of an RAAF C-130A Hercules (A97-209), piloted by 43754 Flight Lieutenant (Flt Lt) Brian Geoffrey Young, No 36 Squadron, RAAF.