Signal flag bearing the names of No 9 Hut at Bakli Bay Prisoner of War Camp, Ambon 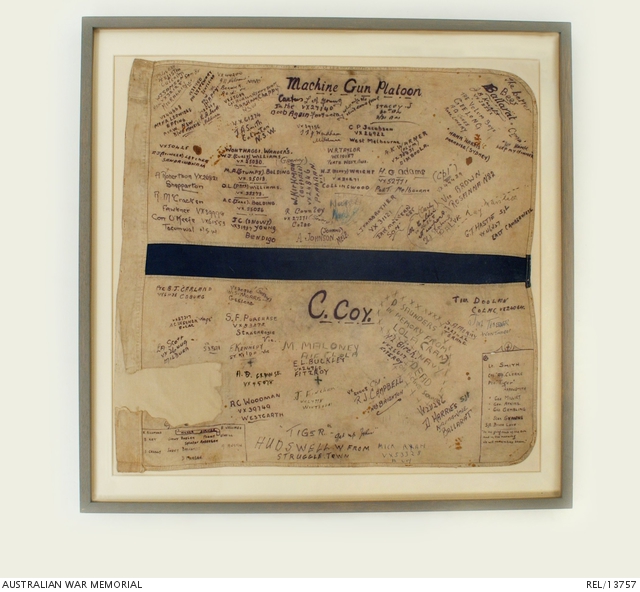 White cotton signal flag with a blue horizontal central stripe, with names written on it in indelible purple pencil. Flag bears the title 'Machine Gun Platoon' on the upper half, and 'C Coy' on the lower half.

The names on the flag, as well as various slogans, are given below. Unless indicated otherwise, those who died, died from disease on Ambon.

This flag was originally carried by Sergeant D Harries, from Ballarat, the bandmaster of 2/21 Battalion. It was signed by members of C Company, Machine Gun Platoon, 2/21 Battalion (Gull Force), who occupied No 9 Hut at Tantoei Prsioner of War Camp on Ambon. The names on the flag were written before October 1942, when some of the Company were moved to Hainan Island. Also on the flag, in rectangles on the lower half, are the names of members of the Company killed in the fighting on Ambon before the surviving members of Gull Force were taken prisoner by the Japanese. A few names have been added to the flag later, in ink and biro, possibly at a POW reunion in Melbourne, in 1984. Two thirds of all the men who signed the flag died in captivity. This exactly mirrors the death rate of the members of Gull Force who were held on Ambon. No 9 Hut was later destroyed as a result of Allied bombing.