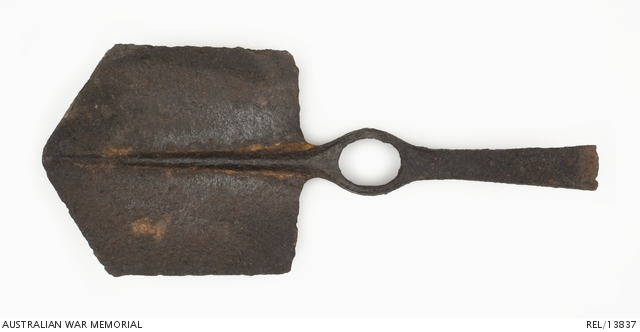 An entrenching tool was issued to each Australian infantryman along with a complete set of pattern 1908 webbing and equipment. The entrenching tool was an important piece of equipment carried by infantrymen when marching and fighting, attached to the webbing for easy access. It was a versatile tool, used to dig defensive and fighting trenches, and was used as a weapon in the close confines of trenches for hand to hand fighting.

This pattern 08 entrenching tool head was found near the French village of Bullecourt. In April and May 1917, Bullecourt was the scene of fierce fighting as Australian troops attacked the German Hindenburg Line. Consisting of deep trenches, dugouts and pillboxes, protected by wide belts of barbed-wire and cleverly sited machine-guns, the Hindenburg Line was a formidable defensive system. By the end of the Second Battle of Bullecourt in mid-May, the Australians had lost 10,000 men killed, wounded, missing or taken prisoner. These were losses from which the AIF never fully recovered.