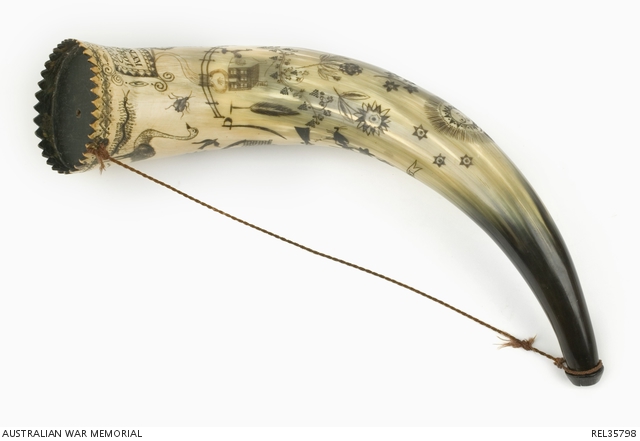 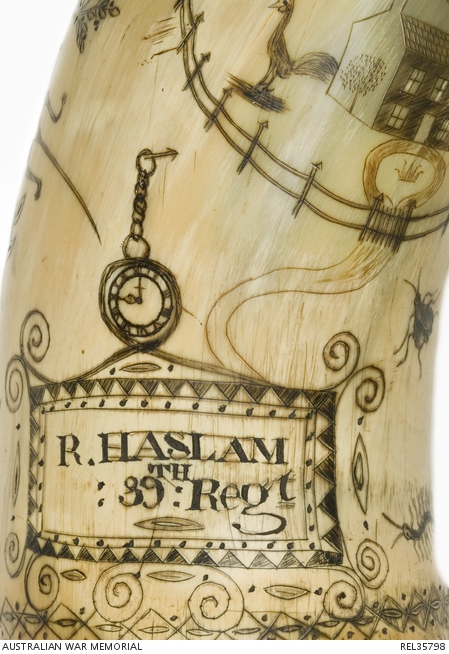 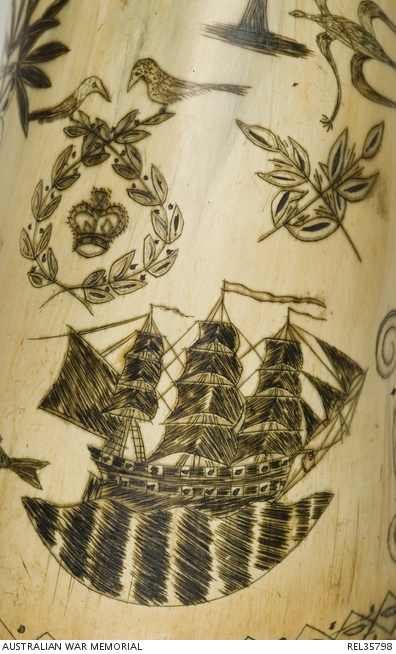 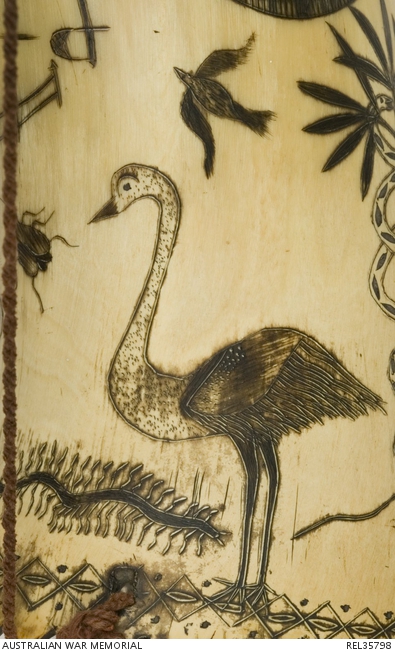 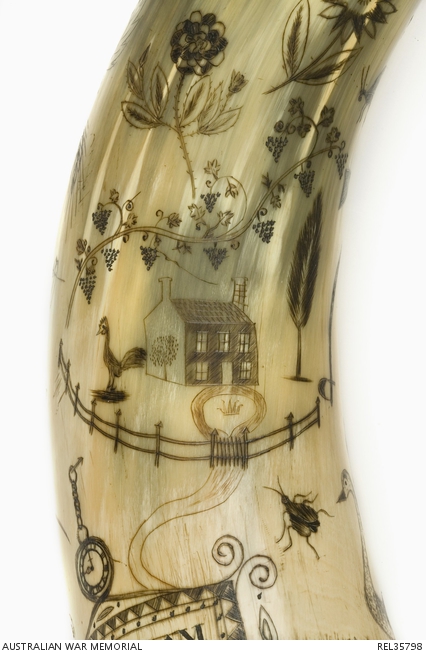 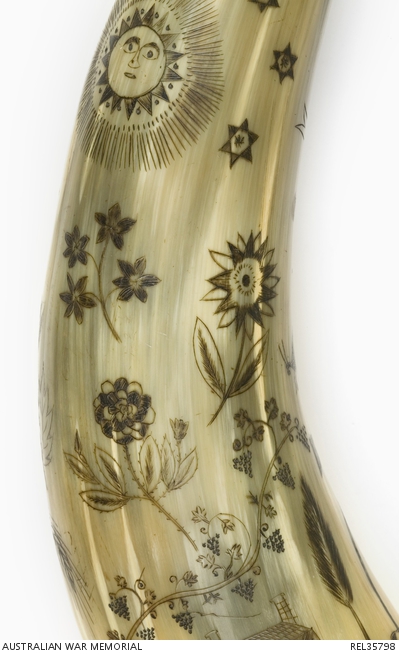 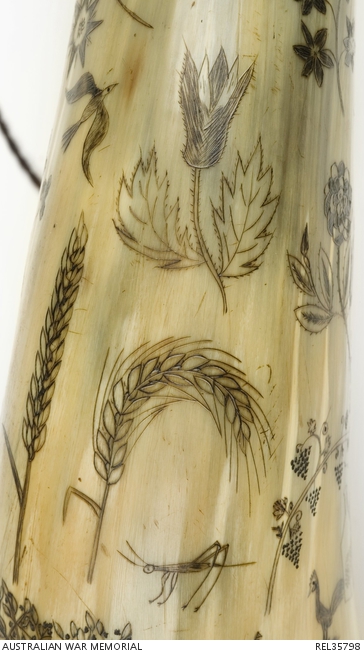 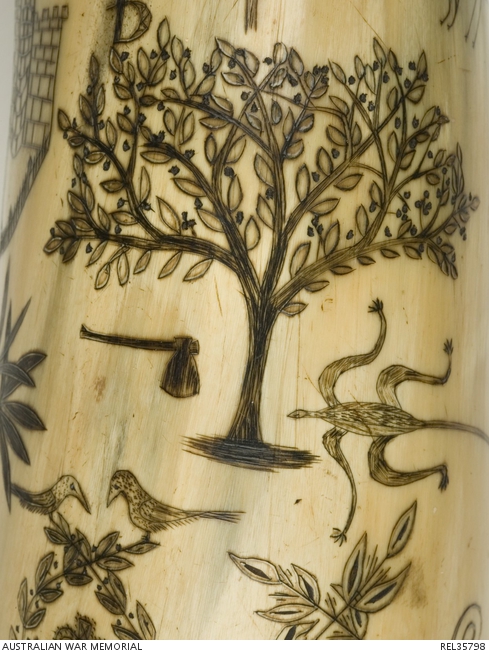 Bullock horn engraved with a scrimshaw technique. The black tip of the horn has been cut off and carved to form a mouthpiece, while the cream body of the horn is engraved and is finished at the end with a carved zig zag edge and a carved decorative band in a diamond pattern. The images on the horn include a sun with a human face and six six-pointed stars; various flowers and plants including the English rose, Scottish thistle, Irish shamrock, Australian banksia, Australian flannel flower, ears of wheat, a grapevine and a fruit tree; various insects and beetles, including a mosquito and a millipede; an emu; a pair of snakes entwined round a tree; a three masted sailing ship and fish; a lizard; a swallow; an image of an English cottage with rooster, pond, picket fence and tree; part of the badge of the 39th Regiment, representing the Fortress of Gibraltar and its key, within two swords and a musket; a smoker's pipe; and a crown within a laurel wreath. The top of the horn bears 'J.BALL 39th Rt' on a ribbon scroll. The bottom of the horn bears 'R.HASLAM 39TH Regt' within a decorative rectangle surmounted by a pocket watch set at nine o'clock. A brown cotton cord is tied to the narrow end of the horn and to a hole cut through the lower edge beneath the image of the millipede.

This engraved bullock horn was designed to mimic the smaller powder horns containing black powder that were used by soldiers with flintlock muskets. It was made in New South Wales between 1826 and 1832, when the 39th (Dorsetshire) Regiment of Foot was posted to the colony. The names of two private soldiers in the regiment are engraved on the horn: John Ball and Richard Haslam. It is not known whether one or both men carried out the engraving, whether it was made as a gift by one man for the other, or which of them took it back to England. It has been speculated that because Ball's name on the horn is smaller than Haslam's, and because he spent extended periods in hospital, that he undertook the engraving as a gift for Haslam.

Private John Ball, a stocking weaver born on 5 May 1804 in the Parish of Enderby (given the alternate spelling Henderby in his service papers) near Leicester, enlisted in the 39th Regiment on 30 December 1822. After service in Ireland he sailed with his regiment to New South Wales on 17 November 1826. He was posted mainly at Parramatta and supervised convicts working on the Great North Road, and was hospitalised for extended periods. He served in the colony for six years before returning to England. Ball was discharged medically unfit due to 'scrofula and incipient consumption' (tuberculosis) on 8 October 1833, having shown signs of the disease for four years. He died on 2 February 1875.

174 Private Richard Wright Haslam, a weaver from Bury, Lancashire, was born on 20 October 1798 and enlisted in the regiment on 19 December 1820, understating his age by three years. Haslam served in England and Ireland before the regiment was posted to New South Wales. During his service in the colony he supervised convicts building the Great North Road between Parramatta and Newcastle; on the north coast; and at Norfolk Island. Although the bulk of the 39th Regiment moved to India in July 1832, arriving at Madras on 10 October, Haslam was still serving at Norfolk Island and did not join them until 1834. He was briefly imprisoned for a minor disciplinary charge between 18 December 1832 and 6 January 1833. During his service in India he spent extended periods based at Poonamallee and Bangalore.

Haslam returned to England, ahead of his regiment, in 1841, suffering from rheumatism and general debility. The medical board that approved his discharge on 21 October 1841 attributed the cause to the bouts of fever and dysentery he had suffered in India, and on one occasion in New South Wales. However, the rheumatism is likely to have been caused by the knapsack equipment carried by soldiers of this period. Smart in appearance, but poor in design, the rigid frame and tight straps were a common cause of early discharge due to arthritis and muscular pain. At the time of his death in 1858 he was an innkeeper in Radford, Nottinghamshire.