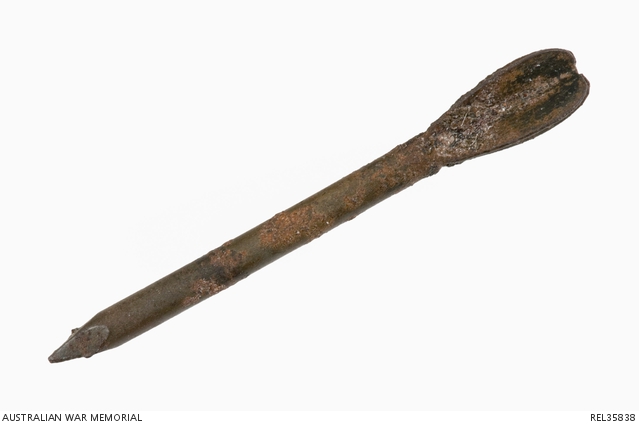 Related to the service of Lance Corporal Alan James (Jack) Parr, born 5 November 1946. Parr served with 1Battalion, Royal Australian Regiment (1 RAR) from 27 March to 12 November 1968 in the Signals Platoon. During the Battle of Coral, he was assigned to 1 RAR's Mortar Platoon and was responsible for the maintenance and operation of two radio sets on two separate nets, one connecting to battalion command and the other commanding the mortar fire missions. He wrote 'I was callsign 8 on the battalion command net and control callsign 7zeroalpha on the mortar platoon net. One of my radio sets was sent r/s by gunfire during the battle [but] I never lost comms. I maintained communications all the time we were over run and surrounded by the enemy. The radios were laying horizontal on the ground and partially covered to avoid detection.' As the Viet Cong overran Firebase Coral, Parr called in artillery support. 'I was able to call in and direct fire support, without a compass, [from] mortars from 3 RAR, LFT's (light fire team, consisting of two helicopter gunships), [and a] Spooky gunship. I believe mortar rounds from 3 RAR landed in our position but so did the enemy's and RPGs so in effect I was calling them onto my own position. Tony Jensen was in the other pit one metre away calling in direct fire using open sights from the 102 Battery guns. They fired HE instantaneous and splintex rounds which made an awesome sound when going through ones own position.' Lance Corporal Parr recovered this splintex dart from his own position after the battle. 'These were lodged everywhere in equipment and weapons...millions were fired into and across our positions in an attempt to clear the enemy.'