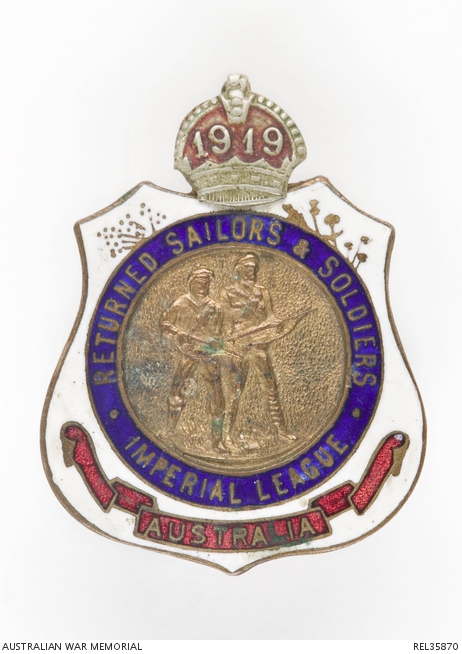 Associated with the service of Lieutenant Colonel John Francis Donnelly who was born on 28 June 1885 at Bywong station in Gundaroo, NSW. He was educated at St Patrick's College, Goulburn after which he returned to the family property. In 1904 Donnelly enlisted in his local militia unit, the 3rd Light Horse Regiment. In November 1905, he was promoted to second lieutenant. His regiment at this time had been renumbered, and was now the 7th Light Horse Regiment. Donnelly was promoted lieutenant in 1908. He resigned in 1910 to join the permanent staff of the Australian Military Forces as a staff sergeant major. He was posted as an instructor to Eastern Command, NSW until the beginning of the First World War. On 1 September 1914, he was appointed regimental quartermaster sergeant major to the 1st Division of the newly formed AIF. He embarked from Melbourne on 22 October in HMAT Orvieto and disembarked in Alexandria the following month. He remained in Egypt until 21 June when he left for Gallipoli aboard the transport ship Minnewaska. He arrived on Gallipoli on 28 June but was wounded within a week and evacuated back to Alexandria. Donnelly returned to Gallipoli early in August. He was promoted to second lieutenant and transferred to 9 Battalion as a platoon commander. He was promoted to lieutenant on 5 October and transferred to 2 Division Headquarters on 16 October as an aide de camp and camp commandant. He remained in this role until the evacuation from Gallipoli in December and upon returning to Alexandria. On 14 March 1916 Donnelly was promoted to captain and transferred to the 2nd Pioneer Battalion as adjutant a day later. He embarked with his unit from Alexandria on 19 March, disembarking in Marseilles on 26 March. Donnelly took part in the fighting at Pozieres in July and was recommended for a Military Cross. This was downgraded to a Mentioned in Despatches. He would be mentioned twice more in the ensuing years of the war. The battalion was frequently at the front line building defensive works or in their secondary role as infantry. In February 1917, Donnelly was made a company commander. On 1 March he was promoted to major and two days later, during the Second Battle of Bullecourt he commanded several of the battalion's companies while they dug a 1052 metre communications trench from a railway embankment near Bullecourt to the Hindenburg Line. Donnelly and his men were subjected to heavy shell fire and constant interruptions by other parties using the partially dug trench as a thoroughfare. The trench was completed after 7 hours of constant work. Donnelly was wounded the following day, but remained on duty. He was sent to the 5th Army Infantry School on 20 May. Donnelly was awarded the Distinguished Service Order on 3 June for his work during the Second Bullecourt Battle as part of the King's Birthday honours. Donnelly returned to his unit on 23 June. On 11 July, he was posted to 6 Australian Infantry Brigade, taking over as brigade major. He rejoined 2 Pioneer Battalion on 19 September and stayed with the battalion for the remainder of the war. On 17 February 1919, Donnelly was promoted to temporary lieutenant colonel and transferred to command 1 Pioneer Battalion. He remained in command until the battalion disbanded. Donnelly stayed in England to take part in a farmers and graziers' tour. He embarked from England for Australia on 12 June in the transport ship Port Darwin disembarking in Melbourne on 27 July. He was discharged from the AIF in November. He returned Bungendore, NSW where he became an auctioneer. He was married in 1923 to Ellen Margaret Cranney. He rejoined 7 Light Horse Regiment with the rank of major and after being promoted to lieutenant colonel, commanded the unit from 1922 until 1928. He was awarded the Volunteer Officers Decoration in 1931 and was placed on the retired list in 1941 with the rank of colonel. He moved to Canberra in the 1950s and passed away on 18 September 1962.