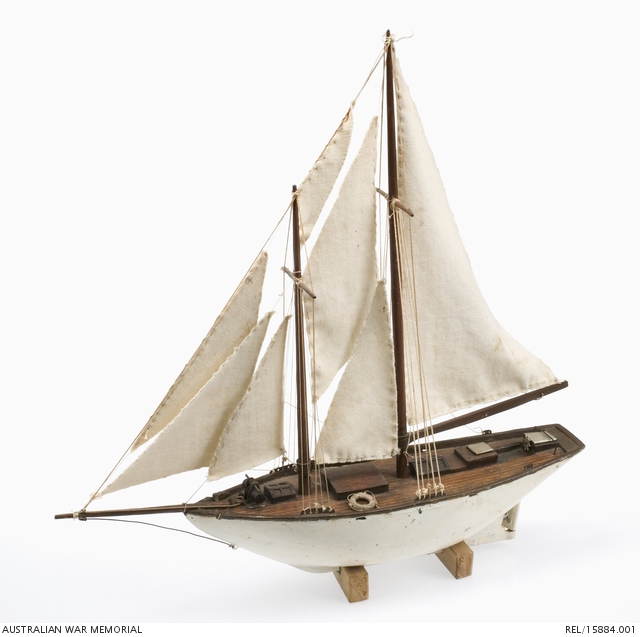 Model two masted schooner with white painted hull, attached to a small fixed stand. The hull, masts and spars are made from tropical meranti wood. The deck has carved wooden hatches, two of which are topped with aluminium, an engine house, ship's wheel, life belt and metal winch. The deck surface has been scored to give the impression of teak planking. A small metal propeller and moving metal rudder are attached to the stern. The schooner has movable booms and bears seven cotton sails and fine cotton cord rigging.

This model ship was made in Changi by two Australians who had been working in Malaya as mining engineers before the Second World War, and were members of the Federated Malay States Volunteer Forces.

13071 Private William Charles Barton, from the Armoured Car Company, and Private William John Harrison, of the Light Artillery Battery, were brothers-in-law who were captured in Singapore by the Japanese. Both worked on the Burma Thailand Railway before returning to Changi POW Camp.

In Changi they joined the 'Changi Yacht Club', a group of enthusiasts who had sailed before the war. The two men took 18 months to fashion this schooner using a small pocket knife and an old chisel. Both men survived the war and eventually returned to their families in Victoria. William Barton was evacuated first, in the hospital ship Manunda, bringing this model with him.