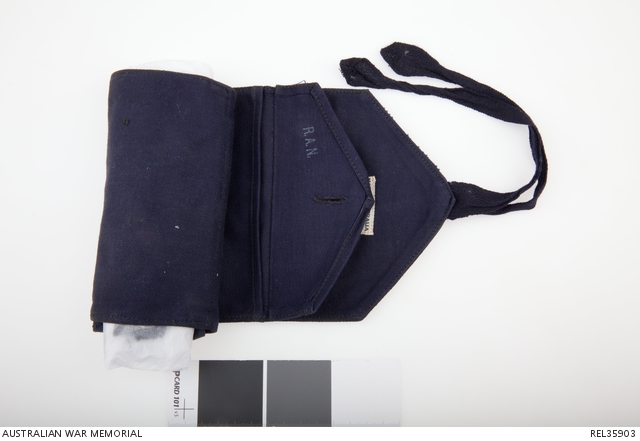 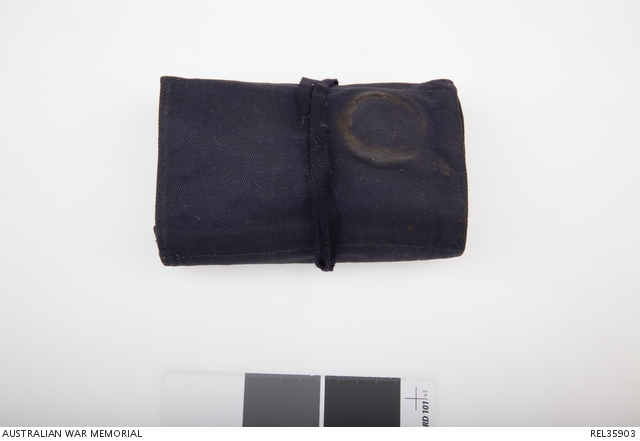 Dark blue cotton jean housewife with a pair of cotton tape ties. Provided with three pockets, two of which have buttoned flaps (the buttons are missing) and a white wool flannel needle holder, containing two needles. Contained within the pockets are a selection of buttons, a disc of wax, two long service and good conduct chevrons - one gold lace and one red worsted, and a folded rectangle of white cotton with portions cut from it. A woven cotton 'Made in Australia' tag is sewn to the inside of the outer flap, and 'R.A.N.' is stamped onto the inside of the first pocket flap.

Related to the service of Roy Leslie Gilmore, born Sydney 20 July 1921. Gilmore served in the Royal Australian Navy (RAN) from 3 September 1939 until 30 October 1945. As an Able Seaman under the service number R32870, he served in HMAS Westralia from January to July 1940 and HMAS Arunta from March to July 1942. In early March 1943, Gilmore was a member of the crew which brought the HMAS Shropshire (the ship which the Royal Navy offered as a replacement for HMAS Canberra which had been sunk near Savo Island in 1942) to Australia from London. He remained with the ship until December 1944. Returning to shore establishments for the remainder of the war, Gilmore was demobbed on 30 October 1945.

Gilmore re-entered the RAN on 17 October 1946 for a period of 12 years and qualified as an Electrical Fitter. He kept renewing his terms of service and finally retired from the RAN at the beginning of 1976. During this period he was involved in the 1952 refit of the aircraft carrier HMAS Sydney, and served as part of the Far East Strategic Reserve in HMA ships Anzac and Tobruk in 1956-57. From May 1963 he served with the Naval Dockyard Police, mainly at Garden Island, Sydney.