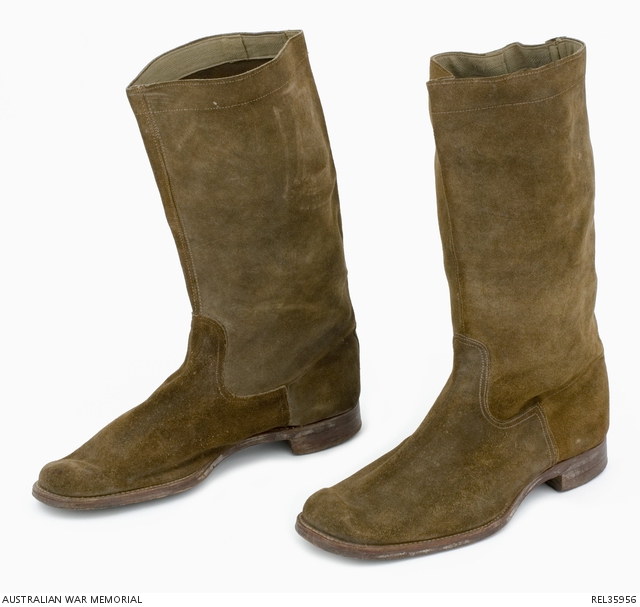 Tan suede mosquito boots with stitched leather soles. On the base of each sole has been stamped 'BROAD ARROW 8' in the arch and 'IX' near the instep. The upper is made up of three parts, these being the front, the heel and the upper. The pieces are all stitched together with a strip of suede sewn down the back of the boot to reinforce the join there. Inside the lip of each boot is sewn a cotton tape designed to hold a drawstring. The drawstring has been removed from both boots. Stamped on the inside of each boot in black ink is 'KINGS CROWN / A.M.' and '8 / W BROAD ARROW D / 141'.

Mosquito boots associated with the service of Flight Lieutenant 263145 Percy Arthur Charles Haberecht. Haberecht was born on 26 September 1904 in Henty, NSW. After completing his schooling, he moved into retail, becoming a sales superintendent. He was married on 20 April 1927 and on 12 April 1930, his daughter Pamela was born. Haberecht applied for a commission in the RAAF at the outbreak of the Second World War and was commissioned on 23 July 1941 with the rank of pilot officer. He left Australia shortly after for the Middle East where he was attached to the RAF. He was posted the Middle East Cipher School on 2 August before being sent to 259 Wing in October. His next posting was to Headquarters 213 Group on 1 December. In these postings, Haberecht was responsible for highly classified cipher transmissions and for streamlining the sending and receiving of surface mail. Haberecht was promoted to flight lieutenant on 23 January 1942 and posted to RAF Station Amman the following day. He remained in this unit until October 1942 when he was posted to the Command Headquarters of the Desert Air Force as officer in charge of organisation. He served with this formation from El Alamein to Tunisia an advance of 1400 miles in 3 months. He was promoted to acting flight lieutenant on 3 December. When the Axis forces in Africa surrendered on 12 May 1943, Haberecht was involved in the allied landings on Sicily and Italy. He was posted to Headquarters Middle East Tactical Air Force in Italy on 6 November. He went on to organise the dispatch communications and official and private letters for all air force units in the Mediterranean and Middle East. He was made acting squadron leader in mid November and had his nominal rank of flight lieutenant confirmed in December. In June 1944, Haberecht was transferred to 202 Group on Corsica where planning for the invasion of southern France was underway. He landed at St Tropez in August and worked with 202 Group and the American 7th Army and 12th Tactical Air Force until the ground forces reached Belgium late in 1944. He returned to Naples in January 1945 where he requested a return to Australia after three and a half years without leave. He arrived back in Sydney in April 1945, reverting to his rank of flight lieutenant. He was posted as officer in charge of the RAAF rehabilitation unit in July and stayed in that position until he was discharged in June 1946. Haberecht ran his own furniture business after the war and passed away on 23 June 1987. The boots were designed for wear in regions where mosquitos and other biting insects were prevalent and they were never intended to be worn as flying kit, but many allied airmen wore them on operations.