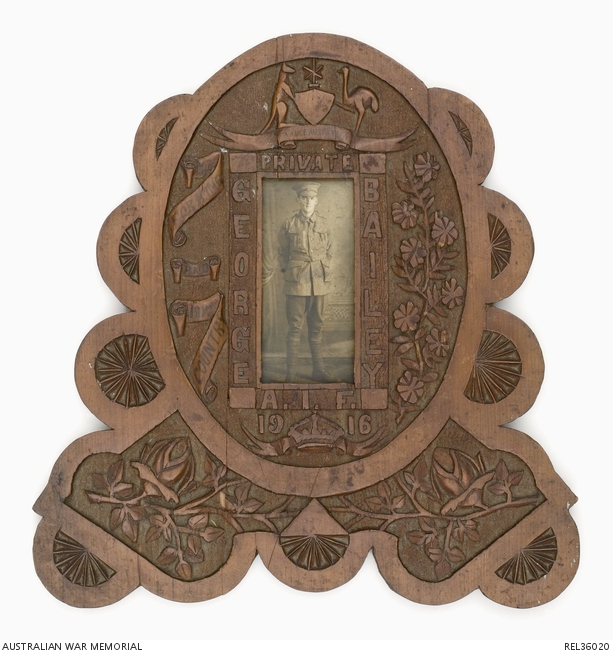 Carved wooden frame and photograph. The top of the frame shows the Australian coat of arms. Scrolls on the right side bear black lettering '1914 FOR KING AND 1917 FOR COUNTRY' . Flowers are carved on the left side. Around the photograph is carved 'PRIVATE GEORGE BAILEY A.I.F.' with '1916', a crown and scroll underneath it. There are roses are carved beneath this. The edge of the frame is decorated with carved with geometric shapes. The photograph is held in place by metal tabs at the back of the frame.

This framed photograph belonged to Mrs Alice Bailey, who worked as a cook at St George Cottage Hospital, Kogarah, in Sydney. The photograph is of her son, 6203 Private Frederick George Bailey (called George). George Bailey was born in Annandale, Sydney on 30 November 1895. He was nearly 21 and working as a labourer with the New South Wales Railways when he enlisted in the AIF at Cootamundra, on 7 September 1916.

Bailey embarked from Sydney with the 17th reinforcements of 19 Battalion on 25 October 1916, arriving at Devonport, England on 28 November 1916. After training in England he joined his battalion in France in 1917, taking part in the battles of Lagnicourt, second Bullecourt, Menin Road and Poelcapple.

Bailey saw no active service in 1918. A series of increasingly long absences without leave and conviction for two minor thefts saw him committed to a civil prison at Wandsworth in England. The war finished before he had completed his sentence and he returned to Australia on board HMAT Ceramic, leaving England on 25 January 1919. He was discharged on 2 May 1919. Mrs Bailey's photograph frame is thought to have been carved for her by Frank Burghart or Burgharty, an acquaintance of the family.