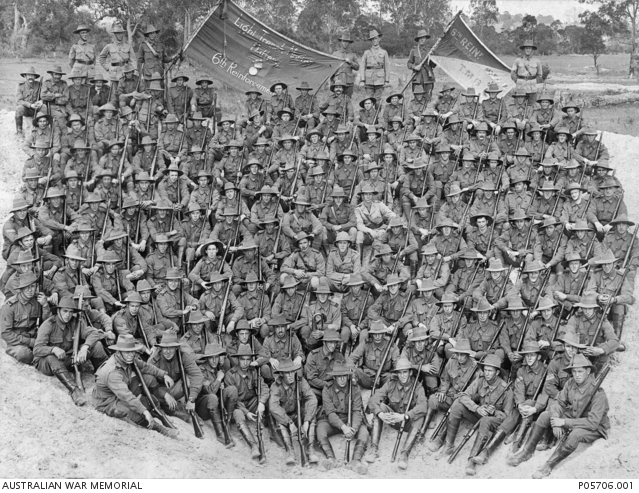 Group portrait of 6th Reinforcements, Light Trench Mortar Battery. Identified is 32715 Gunner (Gnr) Philip Henry Dawes (fourth from left, front row), of Stanmore, NSW, who enlisted on 13 December 1916 and embarked from Sydney, NSW aboard RMS Osterley on 10 February 1917, arriving in Plymouth, England on 11 April 1917. Gnr Dawes returned to Australia on 13 August 1918. Also known to be in the image is Gnr MacFarlane (no further information). There is a bugler in the centre of the third row from the front, and a two men at the rear are holding up the reinforcement group's unit flags. A small group of officers, identified by their Sam Browne Belts, is in the centre of the group. Most of the enlisted men are carrying Short Magazine Lee Enfield (SMLE) .303 rifles. Thought to be in the group, position unknown, is 32733 Gnr Cecil Pithie MacFarlane who left with Gnr Dawes and returned to Australia on 8 May 1919.