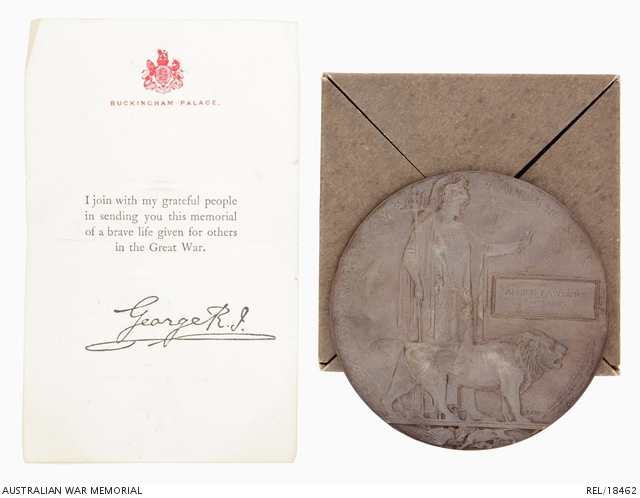 Bronze next of kin plaque, showing on the obverse, Britannia holding a laurel wreath, the British lion, dolphins, a spray of oak leaves and the words 'HE DIED FOR FREEDOM AND HONOUR' around the edge. Beneath the main figures, the British lion defeats the German eagle. The initials 'ECP', for the designer Edward Carter Preston appear above the lion's right forepaw. A raised rectangle above the lion's head bears the name 'ALFRED LAWRENCE EDWARDS'.

Born in Adelaide, South Australia, Alfred Lawrence (Laurie) Edwards was studying theology, aiming to become a Methodist Minster when he enlisted in the AIF on 8 November 1915, aged 23. Posted as a trooper, service number 1961, to reinforcements for the 9th Light Horse Regiment, Edwards sailed from Adelaide on 10 February 1916, aboard HMAT A69 Warilda. Soon after his arrival in Egypt he transferred to 53rd Battery, 14th Field Artillery Brigade as part of the re-organisation of the AIF.

In April 1917 Edwards was awarded the Military Medal for his work in assisting to extinguish a fire in an ammunition dump near Morchies, France, as well as being promoted to corporal. He was killed in action at Hellfire Corner, near Ypres in Belgium on 4 September 1917. The report on his death, compiled by his Battery, stated that: ...'he was killed in action on the morning of 4th Sept. 1917 at about 11 o'clock. He was in a "pill-box" together with others near Hell Fire Corner in the YPRES area, when an enemy high explosive shell hit the dugout, the roof collapsing with the force of the explosion, burying the occupants of the dugout. Death in the case of Cpl. Edwards must have been instantaneous, as there were severe wounds in the chest and abdomen and head, each being sufficient to cause death. He was buried close to the dugout North of the Railway near YPRES, the burial service being read by one of the Sergeants of the Battery. A cross was erected over the grave by the men of the Battery. Map reference Sheet 28.I.10.b.3.4'. Edwards' body was exhumed at the end of 1919 and is now buried in the Birr Cross Roads Cemetery, Belgium.