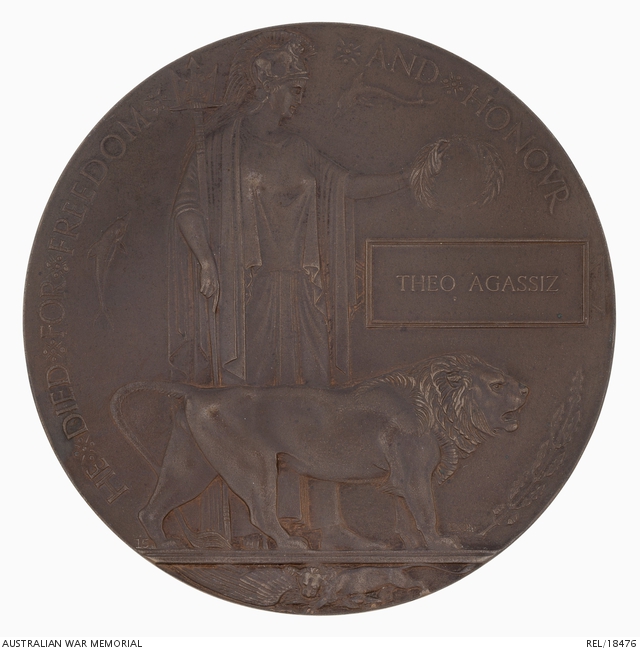 Bronze next of kin plaque, showing on the obverse, Britannia holding a laurel wreath, the British lion, dolphins, a spray of oak leaves and the words 'HE DIED FOR FREEDOM AND HONOUR' around the edge. Beneath the main figures, the British lion defeats the German eagle. The initials 'ECP', for the designer Edward Carter Preston appear above the lion's right forepaw. A raised rectangle above the lion's head bears the name 'THEO AGASSIZ'.

Born in Quirindi, New South Wales, Theo Malcolm Agassiz was employed as a horse driver when he enlisted in the AIF from Newtown in Sydney on 28 January 1915. After initial training he was posted as a private, service number 1902, to the 5th Reinforcements to the 2nd Battalion. He sailed from Sydney aboard HMAT A20 Hororata on 10 April.

In Egypt, in September 1915, Agassiz was transferred to the 3rd Battalion, and posted to the unit's transport section as a driver. He moved to France in March 1916. On 29 September he was posted to the 55th Battalion, again as a transport driver. Less than a month later, on 22 October, Agassiz was killed in action near Flers. He was 24. His body was not recovered for burial and he is commemorated on the Villers-Bretonneux Memorial.

This plaque was sent to Agassiz's eldest brother, Cecil, in July 1922. He had also served in the AIF, as had his youngest brother, Roy, who survived the war as well.