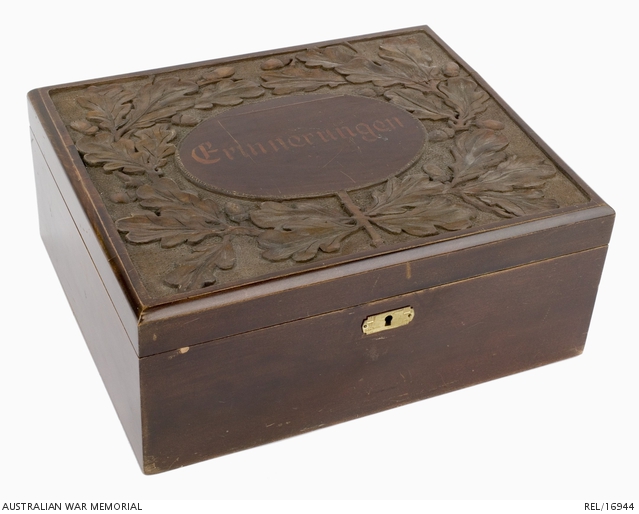 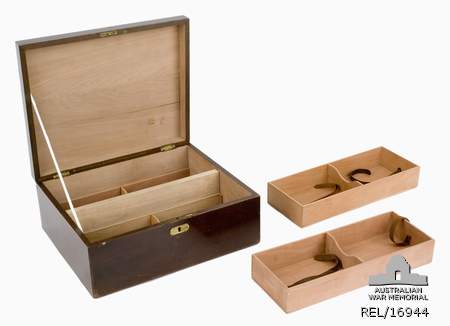 Varnished wooden box, with shallow hinged lid, secured by two brass hinges and a brass lock (key missing). The lid is carved with a wreath of oak leaves and acorns. In the centre, a raised oval shape is inlaided with paler wood with the word 'Erinnerungen' [mementoes/memories/keepsakes].

This box was made by Mrs H Schmidt, for her husband, Frederich Schmidt, between about 1908 and 1910, and was designed to hold some of his collection of glass plate stereo photographic slides.

Frederich Wilhelm Schmidt was born at Liepzig, Saxony, on 10 November 1874. He was a keen member of the German Army Reserve, where he served as an officer. Schmidt ran his own wool business, and from 1902 onwards made regular trips to Australia to buy wool at the Sydney Wool Exchange. After he married in 1908, he found that he was spending so much time in Australia that he maintained a permanent residence in Sydney. He spent about a quarter of each year in Liepzig, another quarter in Sydney during the wool selling season, and the remainder of the year travelling, using Sydney as a base.

Schmidt was a semi-professional collector and breeder of orchids. He maintained an orchid nursery at Hozhausen, near Liepzig, where he bred new cultivars. He named the most successful examples after his wife and children. In pursuit of his 'hobby' he travelled extensively in New South Wales and Queensland, where he identified a number of new orchids, and also in tropical Asia.

When the First World War broke out, in August 1914, Schmidt was in Liepzig. He was immediately recalled for service with the 45th Reserve Infantry Brigade, then at Dresden, part of the 19th Ersatz (Reserve) Division (Saxon), where held the rank of hauptmann (captain). The Division arrived at Strasbourg on 18 August 1914 and fought in the Vosges campaign from 20 August, reaching La Salle on 6 September.

After suffering losses in the campaign, the Division was withdrawn to Lorraine to occupy the Blamont-Ember-Menil-Parroy sector. They remained there, guarding the front from the canal on the river Marne as far as Cirey on the Rhine, until October 1916, when they moved, first to Briey and then to Verdun. Although the Division's losses in this sector were light, Schmidt was one on the casualties. He had already been wounded on a previous occasion, but the severity of the wounds he sustained near Verdun meant that he saw no further active service.

In 1927, Schmidt returned with his family to Sydney. Although he made frequent trips to Germany he considered Australia to be his permanent home. Fluent in English, he was often asked to give talks about his wartime service from a German perspective to returned service organisations. He died in March 1951.