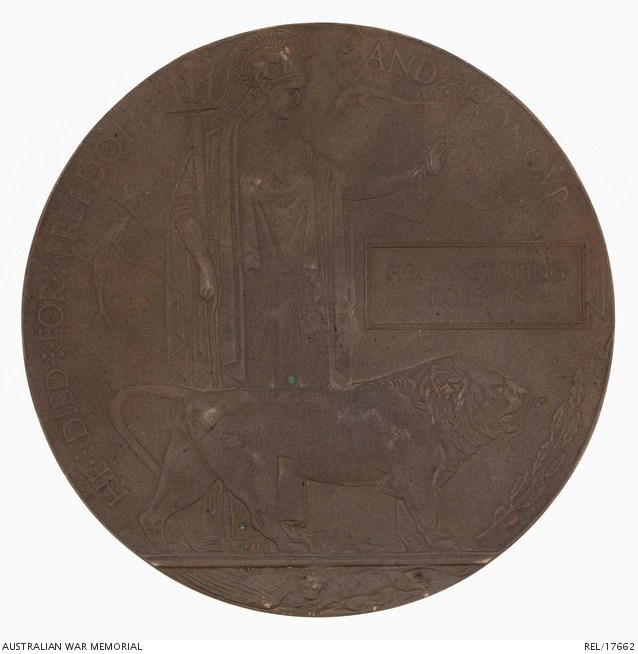 Bronze next of kin plaque, showing on the obverse, Britannia holding a laurel wreath, the British lion, dolphins, a spray of oak leaves and the words 'HE DIED FOR FREEDOM AND HONOUR' around the edge. Beneath the main figures, the British lion defeats the German eagle. The initials 'ECP', for the designer Edward Carter Preston appear above the lion's right forepaw. A raised rectangle above the lion's head bears the name 'HENRY STIRLING ROBERTS'. A checker's mark, '82', is impressed behind the lion's rear right paw.

Born at Orbost, Victoria, Henry Stirling Roberts was working as a horse breaker and farmer at Cowwarr when he enlisted in the AIF at Warragul, on 27 October 1915, at the age of 26. Although he had previously served for three years in the militia, in the 10th Light Horse Regiment (Victorian Mounted Rifles), he had been rejected medically unfit when he first attempted to enlist.

After training in Melbourne Roberts was assigned to the 8th reinforcements for the 58th Battalion as a private, service number 3214. He sailed from Melbourne on 16 December, aboard HMAT A7 Medic, and arrived in England, on 18 February 1917, joining the 15th Training Battalion at Fovant.

Roberts joined 58th Battalion at Contay in France at the beginning of July. On 26 September, near Polygon Wood in Belgium, he was knocked down by a shell at Clapham Junction, while carrying grenades to the front line. Although he was not injured he was evacuated suffering from nervous shock and abdominal pain, first to the17th (British) Casualty Clearing Station, where he was formally diagnosed with shell shock, and then by ambulance train to the 7th Canadian General Hospital at Etaples. He was well enough to be sent to a convalescent depot in early October and rejoined his battalion in December.

Henry Roberts was killed in action at Villers Bretonneux on 25 April 1918, one of 14 men from his battalion who lost their lives during the battle. He is buried at Crucifix Corner Cemetery.

This memorial plaque was sent to his father, Henry Roberts, in December 1922.