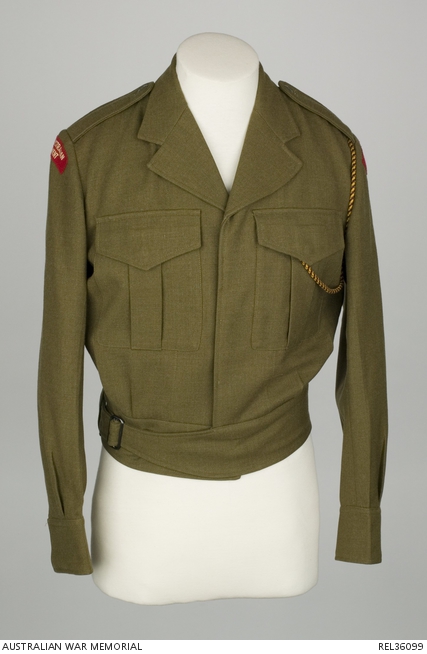 Khaki wool serge battledress blouse with red cloth 'ROYAL AUSTRALIAN REGIMENT' shoulder titles, and a gold and maroon lanyard for 5/7RAR on the left shoulder. A label on the inside left side bears size and care instructions.

Associated with the service of 325878 Private Ross Trevor Langford, who enlisted on 23 June 1983. During his service he was deployed to Rifle Company in Butterworth, Malaysia, for training between March and June 1986. Private Langford served with 5/7 (Mechanised) Infantry Battalion, Royal Australian Regiment (RAR) as a forward scout, driver of an M113A1 Armoured Personnel Carrier (APC). He later served as a crew commander. Langford was qualified to drive all wheeled B Class vehicles, including and up to the Mack and all of its configurations. He was discharged on 22 June 1989. The battle dress blouse has a 5/7 RAR lanyard on it, with the gold of 5 RAR entwined with the maroon of 7 RAR. On 3 December 1973 the two regiments, which had previously been separate entities, were linked to form a new composite battalion and the lanyard colours reflect this event.