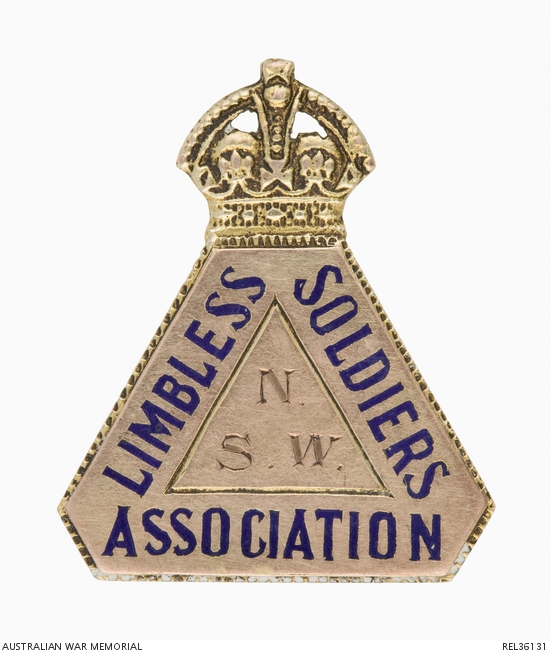 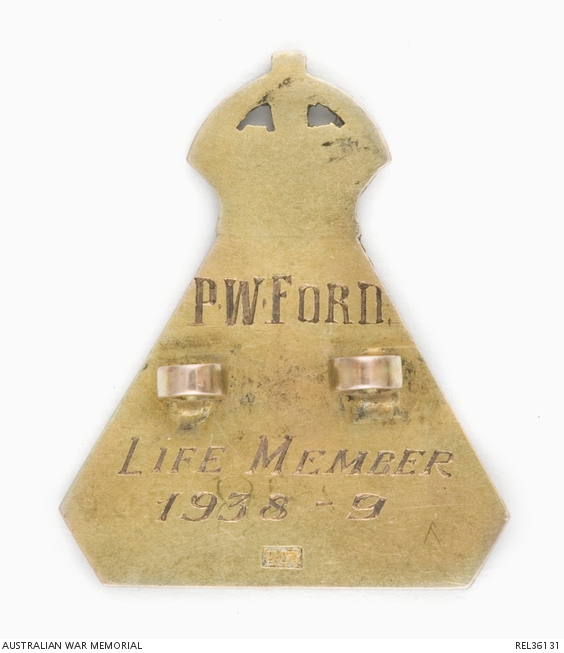 Triangular nine carat gold lapel membership badge surmounted by a king's crown. The front is engraved with an inner triangle and the letters 'N.S.W.'. Around the edge is engraved 'LIMBLESS SOLDIERS ASSOCIATION', with the letters infilled with blue paint. The back of the badge has two brass lugs and is engraved P.W. FORD. LIFE MEMBER 1938-9'.

Percy William Ford was born at Highgate, Middlesex in 1880. He was a seaman and during the Boer War served in the Merchant Navy, transporting troops to South Africa. He was in Sydney when the First World War broke out and enlisted into the Australian Imperial Force on 8 December 1914. He embarked from Sydney with the third reinforcements of 3 Battalion on 11 February 1915 on board HMAT Seang Choon. He served at Gallipoli and was wounded on 12 August with bomb wounds to his buttock and lower extremities and sent to Hospital at Cairo, Egypt. He rejoined his unit on Lemnos in mid September and returned to Gallipoli. After the Gallipoli campaign he returned to Egypt where he was transferred to the Imperial Camel Corps on 5 February 1916. He served in Sinai and Palestine until 19 April 1917 when he was wounded a second time during the Second Battle of Gaza. Ford's camel was hit by a shell and he was struck by shell fragments in his right thigh and foot, hand and back. He was transferred to Cairo, arriving there on 25 April. On 2 May he was reported as seriously ill with chloroform syncope. He was pronounced out of danger on 19 May. On 4 June he was reported seriously ill again and was not declared out of danger until 2 July. During his hospitalisation his right leg became gangrenous and was amputated 4 to 6 inches above the knee. On 11 July he embarked for Australia on board HMAT Port Sydney, arriving in Melbourne on 22 August. He was discharged on 21 February 1918. Percy Ford died on 20 December 1954.