Soldiers of a fighting patrol of 2SAS Squadron examine the wreckage of a Bell UH-1 Iroquois ... 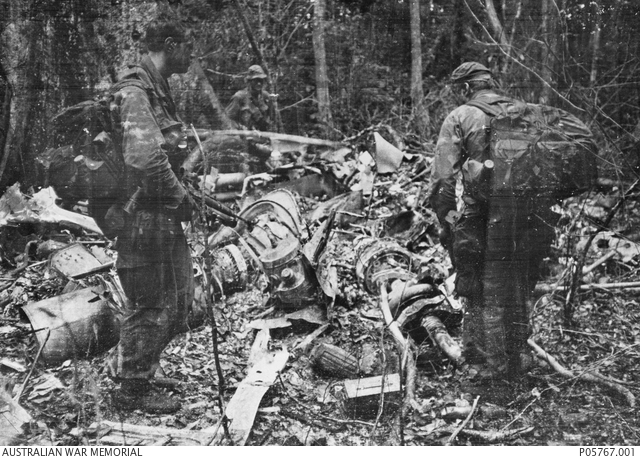 Soldiers of a fighting patrol of 2SAS Squadron examine the wreckage of a Bell UH-1 Iroquois helicopter of 9 Squadron RAAF that was shot down on 7 June 1971 while on an ammunition re-supply mission during Operation Overlord. The captain, O316996 Flight Lieutenant Everitt Murray Lance, and the gunner, A317809 Corporal David John Dubber, were killed in the crash, while two other crewmen escaped with relatively minor injuries. 3179834 Trooper William Egidio (Bill) Robb (left), patrol medic, is carrying an "over and under combination" M16 rifle fitted with an XM-148 40 mm grenade launcher and single point telescope. On the right is 44951 Trooper James Winston (Jim) Briggs, patrol signaller, and in the background is 54901 Sergeant David Willem Scheele, second-in-command of the patrol. The 11-man patrol searched the dense jungle area of Operation Overlord for six days but had no contacts and found little sign of enemy activity.