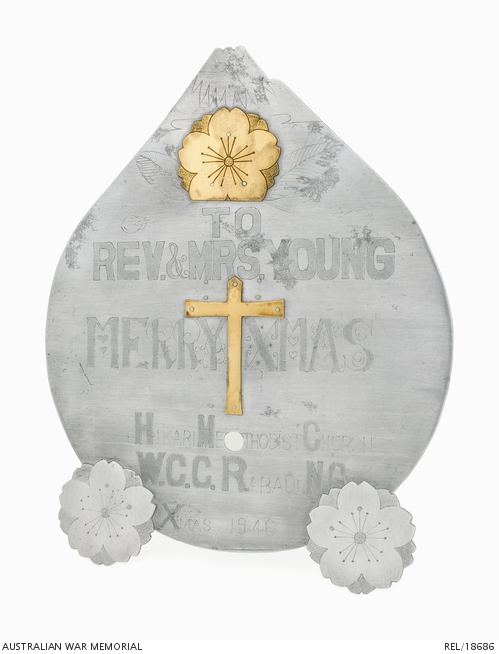 Aluminium and brass Christmas presentation plaque engraved with a depiction of Mt Matupit, inspired by Mount Fuji, and the inscription 'TO REV. & MRS. YOUNG MERRY XMAS HIKARI METHODIST CHURCH W.C.C. RABAUL NG XMAS 1946'. There is a brass cross in the centre and a stylised brass cherry blossom above. There are also two aluminium cherry blossoms at the base of the plaque. A brass stand is attached to the back.

Reverend Gordon Henry Young was born in Port Broughton, South Australia on 6 March 1912. Young enlisted on 11 July 1940 and was assigned service number SX8518. Although Young had completed his theological training prior to the war he was not appointed an army chaplain until 1945 when he was assigned to 13 Field Regiment in Atherton, with the rank of major. Prior to this he served with 6 Division in North Africa with 2/2 Field Workshop and was present at the siege of Tobruk. Young was later evacuated to Ceylon, where he spent three months, before serving in New Guinea, again with field workshops. At the end of the war, as an army chaplain, he was sent to Rabaul where he was responsible for the welfare of the condemned Japanese war criminals held there. In the 18 months before most of them were executed, Young, who was later joined by his wife Elizabeth, taught many of them English and a number converted to Christianity. The Japanese war criminals made this plaque from aircraft wreckage and presented it to the Youngs as a Christmas gift to thank them for their efforts in ensuring their welfare during the time they were interned at Rabaul. Young was discharged on 21 May 1947.